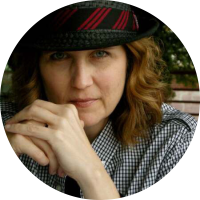 Get feedback on your song and connect with other writers at a LIVE VIRTUAL WORKSHOP held via Zoom! This is a member-only event, and you must be present to receive feedback. It will not cost you a credit to attend.

Stephony Smith, BMI’s 1998 Songwriter of the Year, began her professional songwriting career in Memphis, Tennessee writing commercial jingles for a
major advertising agency. From 1981 to 1988, she wrote more than 4,000 local, regional, and national radio and television spots and won 20 Addy Awards. Stephony also wrote and performed jingles as a solo vocalist for major clients including McDonalds, Dodge Trucks, the Agricultural Council of America, and Carolina Telephone. Memphis is her hometown and the reason Stephony loves all kinds of music, from Soul R&B, Motown, Singer/songwriters, to Pop-Rock. Memphis embraced all genres and her jingle career allowed her to write it all. After signing with Chips Moman/Chappell Music she got to work with the likes of Al Green, Willie Nelson, Ringo Star, Toni Wine, Carl Perkins, Bobby Emmons and J.R. Cobb. Being surrounded by the people that penned, “Do Right Woman, “Luckenbach,Texas”, “Groovy Kind Of Love”, “Spooky” and “Stormy”, had a profound effect on her. The education she received from those masters about songwriting, singing background vocals and production is priceless. So Memphis music without a doubt is in the heart of everything she writes and sings.

Stephony moved to Nashville in 1989 and by the middle of that year landed her first publishing deal with Polygram Publishing, now Universal. To date, Stephony has had cuts by a number of award winning artists including, The Dixie Chicks, Shania Twain, Barbara Streisand, Kenny Chesney, Montgomery Gentry, Terri Clark, Martina McBride, and the legendary Reba McEntire. Tim McGraw’s performance with his wife Faith Hill of “It’s Your Love”, written solely by Stephony, stayed at #1 on the singles chart for six weeks, and was the most played single of 1997. Shortly after, Reba McEntire took “How Was I To Know” all the way to #1. Trisha Yearwood spent two weeks at #1 on the charts with “Perfect Love”, and Chad Brock brought “Yes” to the #1 seat for three weeks. Kenny Chesney took “Big Star” to the number two slot in 2004 and Tim McGraw blistered up the charts to #1 with “Back When” in early 2005. Stephony wrote “Johnny and June” by Curb artist Heidi Newfield (formerly of Trick Pony). This song went into the top 10 in 2009 and was nominated for The Academy of Country Music’s song of the year. “Johnny and June” marks her first release as a writer/sole-publisher.

REGISTER HERE TO SUBMIT A SONG FOR FEEDBACK!