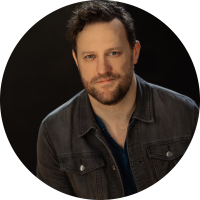 "Come as You Are" and get to know Grammy Award-winning Songwriter and Producer Ben Glover more as he talks about his journey in the music industry and how he successfully navigates his talents through multiple genres. (Christain, Pop, Country)

If you are unable to attend this workshop in person, please note that it will be re-distributed for later viewing.

Ben Glover is a Grammy award winning songwriter and producer from Loveland, Colorado, a small city on the edge of the Rocky Mountains. Glover moved to Nashville in 2000 after signing his first deal the year prior. Originally starting as an artist, Glover discovered quickly that he preferred the studio over the stage and began a fruitful career as a songwriter and producer.

During the course of the last twenty years, he has penned and produced forty #1 songs in multiple genres of music and was named ASCAP’s Christian songwriter of the year in 2010, 2012, 2013, 2015, and 2016. Glover also produced “Hey World” by Lee Brice, including the #1 song “One of Them Girls” with his longtime friend Kyle Jacobs. Other notable songs written by Glover include "Joy" by For King & Country, "Love God, Love People" by Danny Gokey, "Hard to Love" by Lee Brice, “Even If" and “Flawless” by MercyMe, “Come as You Are” by Crowder, and “Overcomer” by Mandisa. The eight-time Grammy nominee has also won multiple Dove Awards, multiple number ones for "Joy" by For King & Country, "Almost Home" by Mercy Me, and "Love God, Love People" by Danny Gokey, and has been a recipient of the NSAI “Top 10 songs I wished I’d Written Award”. Glover has had over 400 songs recorded in multiple genres over the years by artists such as Chris Tomlin, Danny Gokey, Michael W. Smith, Trace Adkins, Thomson Square, The Backstreet Boys, Amy Grant & James Taylor, Clay Walker, NF, Joy Williams, Francesca Battistelli, Marc Broussard, and many more.