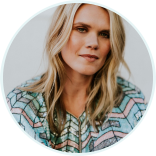 Nicolle Galyon is a singer/songwriter/producer from Sterling, Kansas. She moved to Nashville in 2002 and signed her first publishing deal with Warner/Chappell in 2007. As an artist, Galyon appeared on the 2nd season of NBC’s The Voice and was chosen by Adam Levine for his team.  As a songwriter, she celebrated her first #1 with “We Were Us”, a duet by Keith Urban and Miranda Lambert.  Galyon also penned, “Automatic”, the #1 lead single from Lambert's album Platinum, which included 5 songs by Galyon.  “Automatic” went on to win NSAI & ACM Song of the Year and was nominated for both Grammys and CMA awards.  Most recently, Galyon has been busy co-writing and co-producing the debut album Wild Horse from Warner Bros. artist, RaeLynn, which debuted at #1 on the Billboard Country Albums chart.  This marked the first time in 10 years a female has co-produced an album that debuted #1 on the Country Album chart.  Currently, Lady Antebellum has named their new album, Heart/Break, for one of the 3 songs they wrote with Galyon that appear on the project.  Current radio singles written by Galyon are: Kenny Chesney's "All The Pretty Girls", Lee Brice's lead single for his new album "Boy", Florida Georgia Line's "Smooth", Jana Kramer’s “I’ve Done Love” (which was also produced by Nicolle), Lady Antebellum’s “Heart/Break” and "Lonely Call" by Raelynn. Galyon has also had songs released by Luke Bryan, Thomas Rhett, Lady Antebellum, Dan+Shay, Kelsea Ballerini, Michael Ray, Lauren Alaina, Walker Hayes, High Valley, Ryan Hurd, Lucy Hale, Danielle Bradbery, Martina McBride, Eli Young Band, Jana Kramer, Josh Kelley, Dallas Smith, Maggie Rose and Point Of Grace.