LIVE VIRTUAL WORKSHOP: Get it Together with Roger Brown 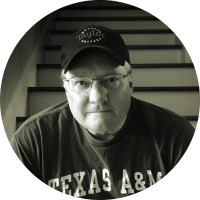 ““Roger and I go back a few. We’re connected at the map. He’s from Menard, Texas. My mom and grandparents are from there. Menard is small and almost everyone there is related. So, Roger and I figure we’re some kind of cousins. My cousin writes beautiful songs that other people record all the time....”

Born in Fort Worth, Roger is the son of a Menard, TX ranching family. He grew up listening to the music his mother loved, which included Bob Wills, Hank Williams, Johnny Horton & Johnny Cash, as well as big band artists such as Glen Miller, Artie Shaw, & The Dorsey Brothers. He began playing guitar and writing songs as a pre-teen, and by the time he was in high school he was performing at local talent shows & dance halls.

After graduating, he became immersed in the thriving Central Texas country music scene, and was soon discovered by Nashville’s Monument Records in 1981, leading to his moving to Music City in 1982. By 1985, he had secured his first recording of one of his songs, “Fool Fool Heart” by Tanya Tucker. This was followed by over three decades of success as a songwriter, securing recordings by a diverse litany of artists including George Strait, Tammy Wynette, Johnny Mathis, Kenny Chesney, John Michael Montgomery, Crystal Gayle, The Oak Ridge Boys, Patty Loveless, Barbra Streisand, Randy Travis, Trace Adkins, and many others. In 1996, he produced & released his own critically acclaimed EP on Decca Records, “Roger Brown & Swing City”, followed in 2000 by the indie CD “Rodeo Boogie”.

In 2003, he was nominated for a Tony Award for his two-song contribution to “Urban Cowboy-The Musical”, and in 2012 he was named the CCMA Songwriter Of The Year for his cowriting credit on “Is It Friday Yet”. His songs have been featured in numerous TV shows & major motion pictures such as “A Fire In The Sky” and “Diggstown”, and he continues to enjoy success with producing and songwriting credits in bluegrass, American, blues, country, Red Dirt, and jazz.

Are you looking for a plan for your songwriting journey for the new year, but aren't sure where to begin?