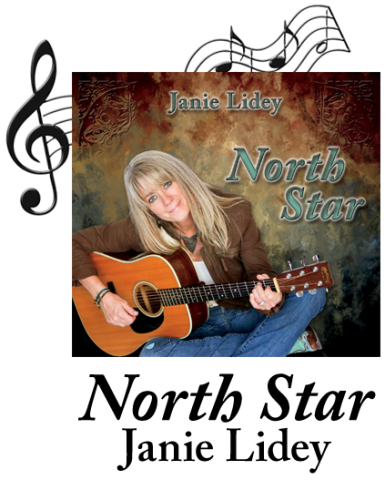 Today we'd like to send a shoutout to NSAI Member Janie Lidey for releasing her new album "North Star," her 6th solo album. “The way this album came to life was divinely guided”, says Lidey.  “I really tried to quiet my mind this year and listen carefully to the messages God and the universe were filling me with. I have a very deep passion for raising the vibration of love on our planet by sharing these messages through the magic of a song."

Congratulations on your success!

ABOUT JANIE LIDEY: Based out of Anchorage, Alaska, Janie Lidey is an Emmy award winning songwriter who has been composing music for over forty years. Rather than focus on her craft alone, Janie dedicated herself to teaching music in the public schools of Alaska for twenty-six years. After seventeen years as the choir director and guitar teacher at Grammy award winning East High School, she decided to step out of the classroom and follow her life-long passion, becoming a full-time singer-songwriter, artist, author and speaker.

Most of the tracks on North Star were recorded in Nashville. On the day Janie went into Lonnie Wilson’s Freeway Sound Studio, she said a little prayer and invited God in to help with the session. What happened over the next seven hours was magical. She said that every song came together as though it were already written in the stars.  The amazing musicians producer Matt Wilder lined up for the session brought each orchestration to life.  ~ Jimmy Nichols on Keyboards ~ Jerry Kimbrough on Guitar ~ Joeie Canaday on Bass ~ Jenee Fleenor on Fiddle and Mandolin ~  Lonnie Wilson on Drums.

The final song on the album, titled In Full Color, was recorded in Anchorage, Los Angeles and Nashville. Musicians from all three cities graced this We Are The World type anthem and Lidey is excited to be releasing it during National Bullying Prevention month.

Gene Bedley of Lift Up America recently wrote, “Music is the universal language that will lift the world and make it sing in unison. I believe the message Janie Lidey brings in her stories and songs is what will fuel the movement!”