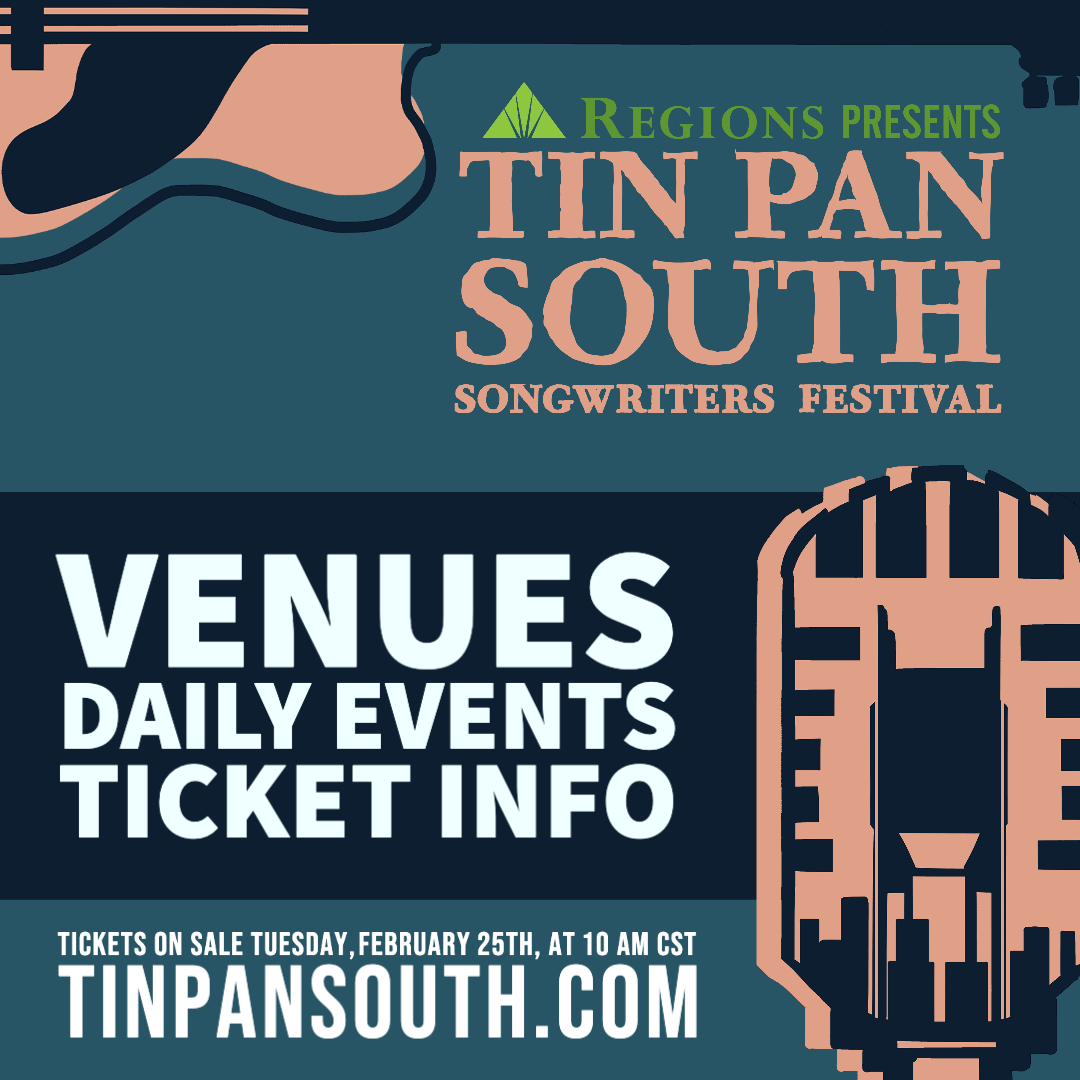 The Nashville Songwriters Association International (NSAI), in partnership with Regions Bank for the 13th consecutive year, is excited to announce additional details surrounding one of the most anticipated events in Nashville each year, the 28th annual Tin Pan South Songwriters Festival. Taking place March 24th through the 28th, 2020, this year's festival will not only feature performances from a diverse array of musical talent spanning across different genres, but the entire week will be filled with events.

Since its inception, the Tin Pan South Songwriters Festival has offered audiences a platform to discover up-and-coming songwriters and watch legends at work. Past festivals have featured stellar performances by Lori McKenna, Thomas Rhett, RaeLynn, Josh Osborne, and many more. This year's full lineup and schedule will be revealed on tinpansouth.com Tuesday, February 25th, at 10 AM CST when Fast Access Passes go on sale. For a sneak peek at the line-up, download the festival app and you can see the performer list on Friday, February 21st.

This year, Tin Pan South week will not only include 5 nights of back-to-back shows in 10 venues, but daytime programming at the Country Music Hall of Fame and Museum Thursday - Saturday, an NSAI open house, a Whiskey Jam takeover, the first annual Member Awards presented by Regions Bank, and one of NSAI's premier educational events, Tin Pan South Songwriting Seminar.

March 23rd - Tin Pan South will kick off the 2020 festival with a Whiskey Jam takeover, giving attendees a taste of what to expect for the upcoming week.
March 23rd-24th  - Tin Pan South Songwriting Seminar offering an opportunity to learn from over a dozen industry professionals (including several songwriters who will be performing later in the week during the festival!)

March 26th-28th - Afternoon programming at the Country Music Hall of Fame and Museum beginning at 2 PM each day.

In its 28 years, the Tin Pan South Songwriters Festival has served as a platform for NSAI to celebrate the songwriting community in Nashville and beyond. This year's festival will include 100 shows taking place across 10 Nashville-area venues, such as:

The Lounge at City Winery Nashville

For additional information and upcoming announcements about performers and venues, check out tinpansouth.com or download the Tin Pan South app.

Organizers of the 28th Annual Tin Pan South Songwriters Festival would like to thank the following Platinum and Gold Corporate Partners:

About NSAI:
Established in 1967, the Nashville Songwriters Association International (NSAI) is the world's largest not-for-profit songwriters trade organization and has a membership of more than 5,000 spanning the United States and eight (8) foreign countries. Consisting of a body of creative minds, including songwriters from all genres of music, professional and aspiring, for over 52 years, NSAI has been committed to protecting the rights and future of the profession of songwriting, as well as carrying a commitment to educate, elevate and celebrate the songwriter, acting as a unifying force within the music community and the community at large. For more information, visit nashvillesongwriters.com.

Regions Financial Corporation (NYSE:RF), with $128 billion in assets, is a member of the S&P 500 Index and is one of the nation's largest full-service providers of consumer and commercial banking, wealth management, and mortgage products and services. Regions serves customers across the South, Midwest and Texas, and through its subsidiary, Regions Bank, operates approximately 1,500 banking offices and 2,000 ATMs. Regions Bank is an Equal Housing Lender and Member FDIC. Additional information about Regions and its full line of products and services can be found at www.regions.com.