6 Different Ways to Write for Sync by Tracey + Vance Marino 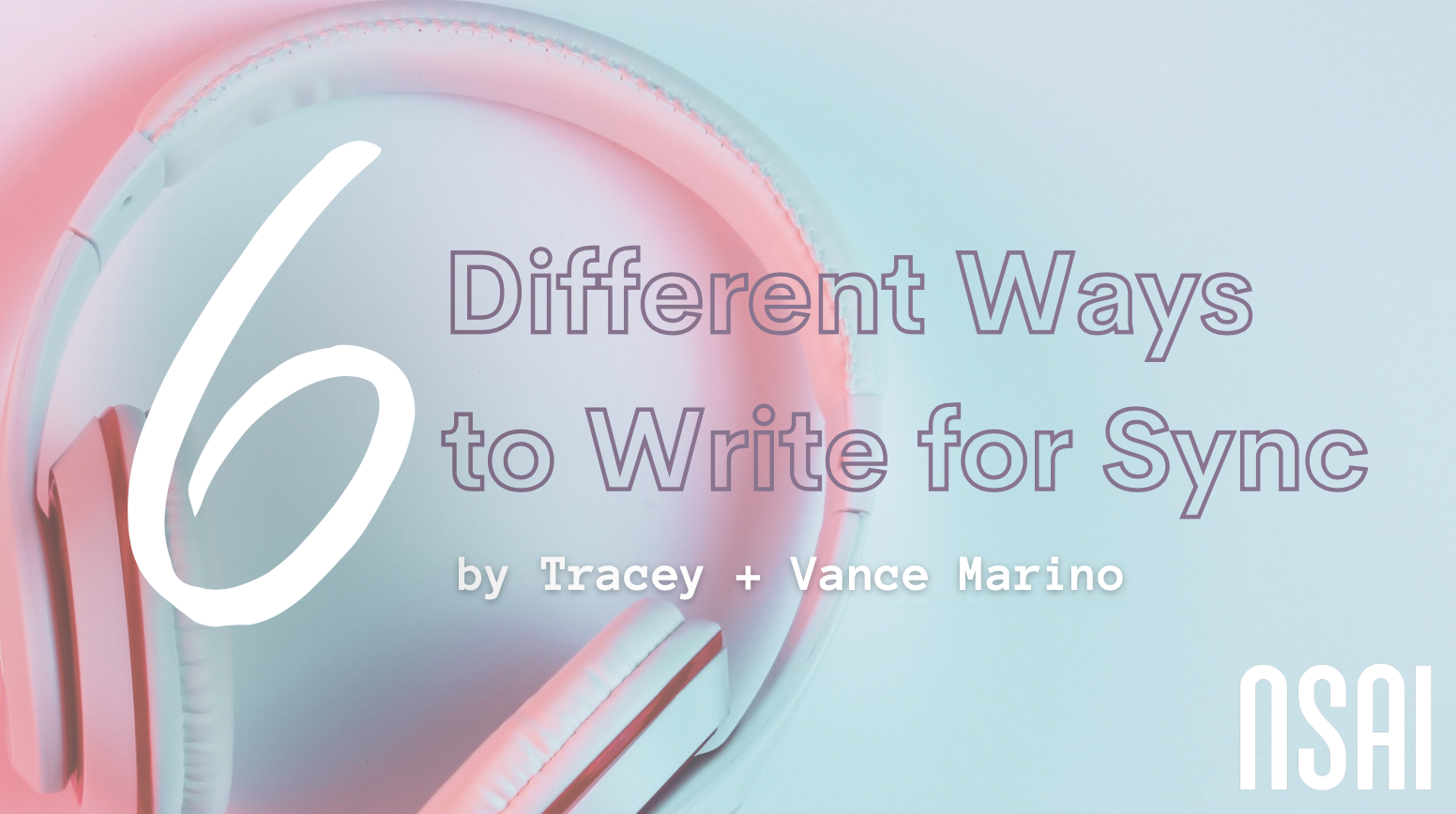 Getting music placed in film, TV, commercials, trailers, video games, and other media projects is known as “sync” or “music licensing.” Sync is short for “synchronization,” which refers to combining music (audio) with a scene (video). This is a growing source of revenue for songwriters in today’s music business.

Writing songs intended for sync licensing and writing songs to be pitched to recording artists have a lot in common. Similarities include: song structures, rhyme schemes, contrasting sections, fresh language, and well-crafted, cliché-free lyrics that have a clear message.

However, there are six important distinctions. Knowing these sometimes subtle differences may make or break your chances of getting placements in the sync world.

When writing a song intended for a recording artist to cut, many of us were encouraged to write a song with a story contained in the lyrics. As helpful as this might be when someone is listening to a song, this can be problematic when writing for sync.

The story taking place on the screen may be different than the story in your song. This could confuse the viewer. The purpose of the song accompanying a scene is to enhance the emotion in that scene. Story songs tend to have emotions that change and evolve as the lyrics unfold. A song for sync needs to have a consistent emotion from start to finish so it doesn’t take the viewer out of the scene.

Yes, you read that right. Your lyrics should tell the viewer about the emotion the onscreen characters are feeling instead of showing detailed images, which may conflict with what’s visible on the screen.

When a listener hears their favorite song, they imagine the images portrayed in the lyrics. Known as “putting furniture in the room,” this is a helpful device when there’s no accompanying video, and it’s a good technique when writing songs intended for listening only.

Yet, in the sync world, the images are provided in the video, so the images (or the story) in the lyrics cannot distract from what is happening on the screen.

For example: If a song lyric references a “big blue pickup truck speeding at midnight on a dark, deserted road,” it will likely not be placed in a scene that doesn’t contain these details. In fact, even if the scene does show these images, these lyrics would be considered “on the nose.” This means the lyrics are too exact and redundant, which does not typically work in the sync world. Specific lyrics won’t help if they match or conflict with the scene. In fact, they will get in the way and reduce the song’s probability of getting placed.

3) ONCE MORE WITH FEELING

So, if you can’t write a story, or use specific images, what can you write about? We’re glad you asked. When a song is used to accompany a scene, its main purpose is to underscore or highlight the emotion or mood of the scene. The lyrics in a sync song should talk about what a character is going through, thinking about, or experiencing in a single moment.

· Non-specific references of the physical manifestations of a feeling: “he clenched his fist” (anger); “she was shaking” (fear); “we laughed ‘til we cried” (joy).

· Second levels of emotion: “I hate him, and I feel bad about that”; “she loves him, but she feels guilty”; “you cheated on me, but you’re not sorry.”

· Non-specific lyrical similes to convey the emotion: “heart beating like a drum”; “creeping like a villain”; “deep as the ocean.”

· Non-specific metaphors and symbolism that convey an emotion, mood, or feeling: “life is a journey” (changing; growing; finding a new life); “the long road ahead” (moving on; starting a new chapter; taking on a challenge); “floating on a cloud” (being in love, content, or happy)

4) THE UNIVERSAL RULE OF NON-SPECIFICS

Okay, we just made that up. But it is a thing in the sync world. Because of potential conflicts between the lyrics and the images on the screen, ideally, successful songs for sync should avoid specific references. In most cases, it’s fine to use broad, general terms.

When writing for sync, it’s best to write without using words that describe particular details. Sometimes it’s difficult to avoid descriptive lyrics altogether. If you feel your song would be stronger with some information about the setting, here are some substitution possibilities:

· Names of Places. Instead of:

o “The Ozarks,” replace it with “mountains”

o “La Jolla, California,” replace it with “city by the sea”

· Names of People. Instead of:

o “Joe, the bartender,” write “a friend of mine”

· Brand names. Instead of:

· Quantities and sizes. Instead of:

o “Five o’clock,” consider “this morning,” “this afternoon,” “in the evening,” “tonight”

5) TAKE ANOTHER LITTLE PIECE OF MY SONG NOW, BABY

When writing for sync, create sections that can stand alone. Songs intended for recording artists are usually heard from start to finish. Sync songs are often not used in their entirety. In many cases, only the chorus will be used. For this reason, the chorus should make sense on its own without needing the verses to explain it. Like the rest of the song, the chorus should have a consistent emotion and not swing from one to another while still making sense. Similarly to hit songs, the verses should point to the chorus.

It is also common in sync placements for pieces of a song section to be used. For example, the music user may start with your song’s introduction, skip verse one, then go to the chorus. Next, they may use the second half of verse two, then end with the last chorus. In essence, the person syncing your music may take your song apart and put it back together again without using all the pieces. (Knowing this ahead of time may help soften the shock of hearing your precious work of art getting chopped to bits and rearranged. Just think of the nice payment you’ll be getting!)

As stated earlier, songs that are synced are not always used continuously from start to finish. In order for a music user (usually a music editor) to edit the song seamlessly, there should be no changes in the key, tempo, and groove. For example, if the music editor wants to use the first half of the first chorus and the last half of the final chorus, which is in a different key, then this will be jarring to the viewer. When something about the music takes the viewer out of the scene, it’s a deal breaker in the sync world.

However, there are other kinds of non-songwriting changes you can make to your song to keep it interesting—and perhaps even more syncable—and these are highly recommended. These tips are not about songwriting, rather, they’re about

arranging and producing. There are many ways to incorporate these variations. (If you’re not recording the music yourself, always have an open dialogue with your arranger/producer.) For example

· Omit drums on verse one, then have them enter on the first chorus

· Have different accompanying instruments on each verse

· Take out most of the instruments, leaving just have the vocals on the last chorus (known as “stripping down” the accompaniment)

Disclaimer: Changing the arrangement, instrumentation, or production of your song’s recording is not a substitute for writing a song with contrasting elements.

There are many occasions when a hit song does not follow these guidelines, yet it gets synced. This is because it is a known, familiar hit song. There are always exceptions to the rules.

The purpose of these suggestions is to increase your odds of getting your song placed in a film or TV show, whether or not it’s a hit. We all know there are a limited number of chances to getting outside songs cut by a major artist, and it can take years before finding success.

The sync world can provide an alternative because it’s more accessible. With the rise in streaming services, in addition to existing cable and broadcast TV, there are more opportunities to get your songs synced than ever before. It can be a great new path to explore, even though writing songs for sync may require an adjustment to your creative approach. Now, you’re ready to get sync!

Tracey Marino and Vance Marino are songwriters, composers, musicians, producers, and authors of the book, Hey! That’s My Song! A Guide to Getting Music Placements in Film, TV, and Media. They work with over 50 music publishers and sync agents and have more than 3,000 songs and instrumentals in their catalog. Their music is heard daily around the world, and every piece of music they’ve written is signed somewhere. Since 2012, they have been the NSAI San Diego Chapter Coordinators, and their chapter’s members inspired the Marinos to write their book about getting multiple sync placements. Visit www.HeyThatsMySong.com for more information. © SongMaker Productions, Tracey Marino, Vance Marino, 2022.