Want some one-on-one feedback on your songs?

Have a question about the music industry, or need some guidance on how to achieve your songwriting goals?

Utilize your mentoring credits to meet one-on-one with one of our mentors and get those questions answered!

You may send in up to three songs to review with a mentor for each session. Mentors are currently available to meet via either Zoom or phone call. 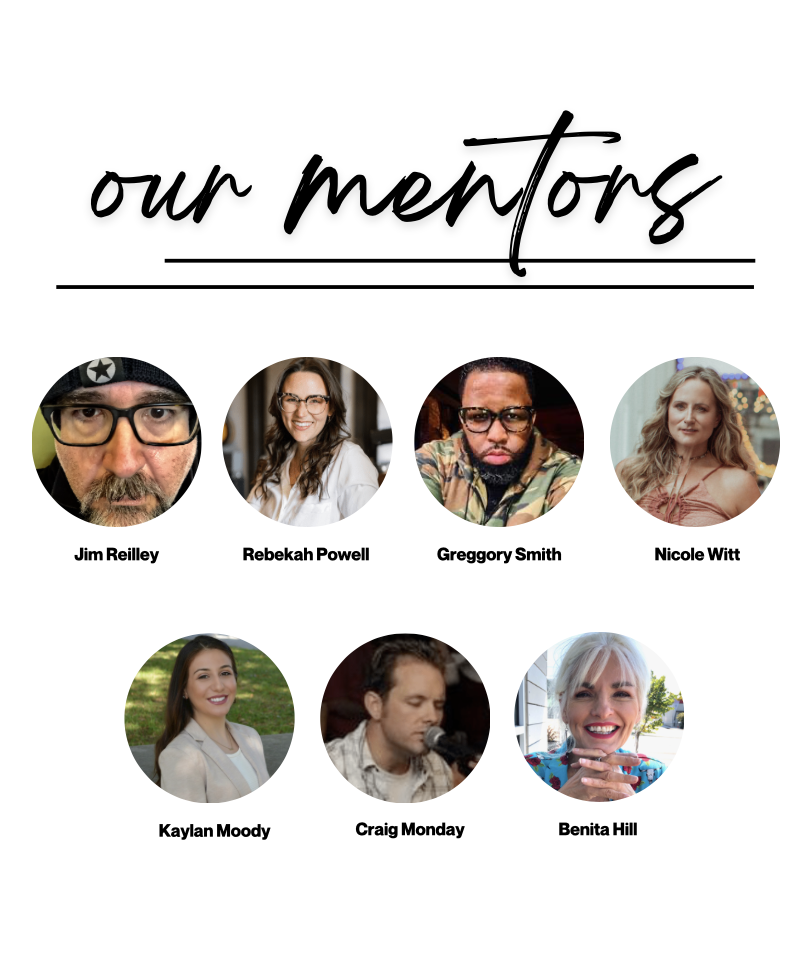 Producer/bassist Jim Reilley will most likely be remembered as a founding member (along with musical partner Reese Campbell) of seminal folk rock band The New Dylans. Founded in 1986, the band barnstormed the US throughout the 90’s and won critical praise from Rolling Stone (who called their songs “offbeat classics”). After 9 years of solid touring often over 175 dates a year sharing stages with many luminaries including R&R Hall Of Famers The Band, Reilley moved to Nashville to sign a writing and production deal with Curb Records. As a songwriter, Reilley had over 50 songs recorded by such artists as Hal Ketchum, Sam Bush, Vince Gill, Tim O’Brien and had a European hit with Danish Rock legend Peter Belli. Albums produced by Reilley have won Best Album awards at Kerrville Folk festival and Merlefest as well as The John Lennon Songwriting Competition and many of them have gone on to be released by major labels and many have garnered millions of spins on Spotify and other streaming services.

After growing up in Nashville in a family of award-winning songwriters, she began her music career at the age of 16 when she became the youngest person at the time to ever perform for Congress to advocate for songwriters’ rights with NSAI.  She has gone on to work with celebrated artists and producers such as Zooey Deschanel (of She & Him), Ward Thomas, James Otto, Sarah Darling, TyDi, Alice on the Roof, and many others. She has over 50 cuts on major, best-selling, and critically-acclaimed albums in several genres and received a #1 Award for her 10-song contribution to Ward Thomas’s chart-topping record Cartwheels, the first country album to ever reach #1 in the UK.

As a songwriter and life coach, she explores the power of storytelling to unlock deep presence and authentic self-expression. Over the last decade plus, she has hosted workshops on creativity, mentored writers and artists, and co-facilitated quarterly team-building keynotes on the art of collaboration for a Fortune 100 company.

Greggory Smith serves as Associate Managing Partner for Vision Entertainment Group, an independent artist development entity partnered with  Entertainment Music Executive veteran, Brian Miller. Smith is responsible for establishing new artists, writers and producers and providing creative opportunities. Prior to VEG, Smith served as Head Of A&R for The Robosac Collection, an independent publishing entity owned by iconic songwriter David Porter in Memphis, TN.  Before Robosac, Smith served as General Manager for Vintern Songs, an independent publishing entity parented by Entertainment One Publishing in Nashville. Smith was responsible for signing new writers and producers and providing creative opportunities to the aspiring creatives on the roster.

Nicole Witt is a nationally-touring, award-winning songwriter and multi-instrumentalist known for her soaring melodies and clever turns of phrase.

She has written songs for artists such as George Strait, Lee Brice, Rodney Atkins, Jana Kramer, Terri Clark, Lauren Alaina, Balsam Range, Mandisa, and many more. In 2011, Witt received the international Bluegrass Song of the Year Award for Balsam Range’s “Trains I Missed.”  In 2014, she was nominated for a Dove/GMA award for Country Song of the Year. She has moved into TV and film writing with song credits on shows like “Reign”, “American Idol” and the short film score called Black Mountain. In the spring of 2021 “Stronger” was written as a part of Ellie Holcomb’s Canyon album.  Her latest release “You Ain’t” by Aaron Goodvin (feat. Meghan Patrick) went to Canadian Country radio 9/23.

Witt has spent the last 10 years writing and touring while building a grassroots small business as an artist, songwriter & mentor. In the past 4 years she has played over 200 dates performing all over the country and world opening for Kenny Chesney, Old Dominion, Trace Adkins, Billy Currington, Bacon Bros, Marshall Tucker & many more.

KAYLAN MOODY
Kaylan Moody joined Big Machine Label Group in Nashville in the newly-created position of Start Team Lead in June of 2021. In that role, she works with developing artists in a variety of formats across the company's roster. Kaylan joined BMLG from the Associate Editor/Nashville position at All Access Music Group. Prior to All Access, she was music director/morning talent for Marc Radio Group's Alternative WHHZ (100.5 The Buzz)/Gainesville, FL. She launched her career in radio as an undergraduate at the University of Florida, where she worked on the air at university-owned stations Country WRUF-FM (103.7 The Gator) and Top 40 GHQ, where she was also a research assistant and student GM.
CRAIG MONDAY
Originally from Luttrell, Tennessee, Craig Monday's journey into songwriting started when he and some buddies formed a rock band and wound up needing some original songs for a show... Something they didn't have at the time. Craig decided to give it a go, wrote a song, and well, the rest is history. He started writing for country, and after moving to Nashville in 1996, he won NSAI's World's Largest Open Mic, which he said was one of the first things to boost his confidence that he could pursue songwriting. Since then, he has had cuts with Kenny Chesney, Randy Houser, Vince Gill, Diamond Rio, Amy Grant, The Blind Boys of Alabama and Jamey Johnson.
BENITA HILL
Singer/songwriter Benita Hill has had cuts in nearly every genre there is, from country, pop and rock to jazz, gospel and musical theater. She is a cowriter on Garth Brooks' "It's Your Song" and "Two Pina Coladas," and has had other cuts with Isaac Hayes, Crystal Cayle, Kirk Whalum, Kevin Whalum, Take 6 and more. Benita has released seven albums of her own, has toured as a background singer with the Allman Brothers, J.J. Cale, Conway Twitty and others, and is the voice behind "Santa Baby" in the Jaguar Automobiles commercials. As if her accomplishments weren't already impressive enough, Benita self-produced the documentary "The Healing Power of a Song" and co=wrote six songs for the international movie musical, "Cooking for Two."

All mentor sessions must take place during your membership year to be counted, so plan accordingly! Credits do not roll over from year to year.