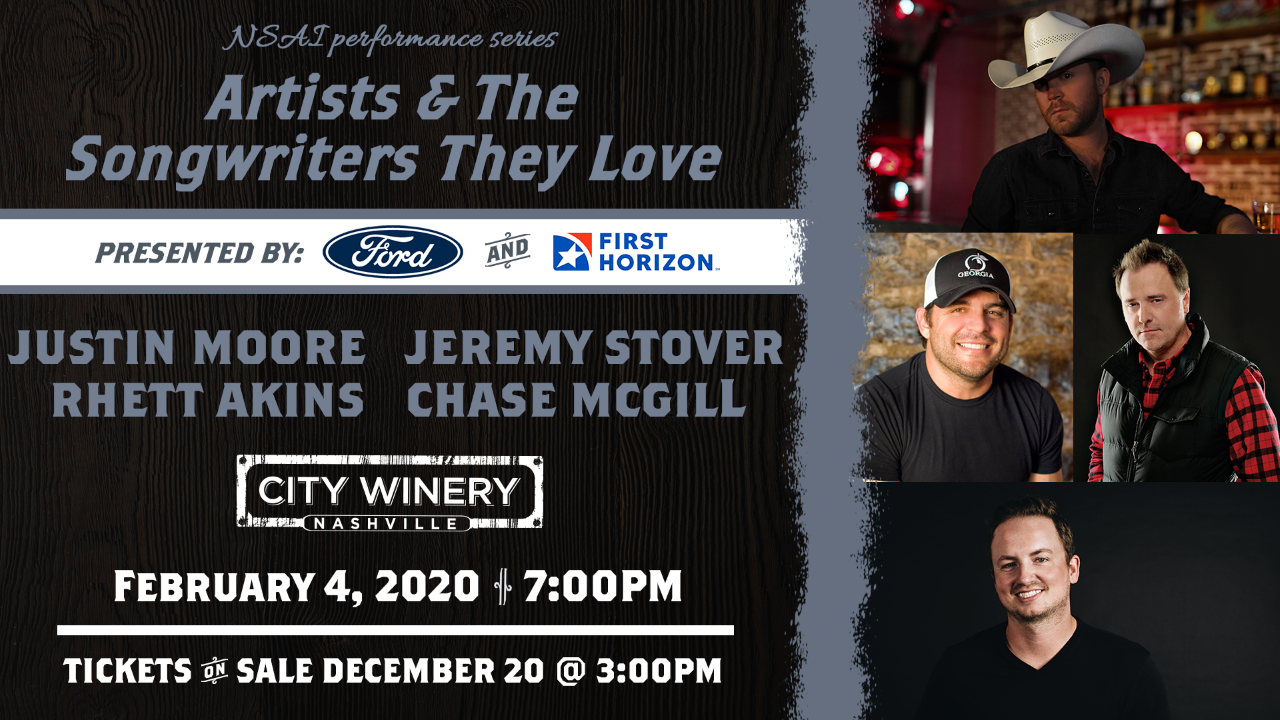 The event will be presented by Ford Motor Company and First Horizon, and will once again showcase the bond between artists and songwriters as they perform and share stories behind how the songs were written. Learning the inspiration behind a song and how it came to be will transform how it is heard and make your favorite song that much more meaningful, so audiences are in for an incredible concert experience!

About Justin Moore
Chart-topping powerhouse Justin Moore proves that, through all the fame and success, he’s still just the same country boy he’s always been on his stellar new album, ‘Late Nights and Longnecks.’ Tipping its cap to Alan Jackson and George Strait, the record is Moore’s most traditional-sounding collection to date, a no-frills portrait of small-town life and big-time dreams that’s not afraid to let its hair down and party at the end of a hard day’s work. Equal parts celebration and reflection, the album is a showcase for Moore’s evocative storytelling and unforgettable voice, complemented by an all-star band featuring GRAMMY and CMA Award-winning guitar icon Brent Mason ACM-winning pedal steel hero Paul Franklin among others.

An Arkansas native who grew up idolizing Dwight Yoakam and Keith Whitley, Moore knows a thing or two about hit records himself. After signing to The Valory Music Co., an imprint of the Big Machine Label Group, he landed his first country #1 with “Small Town USA,” the breakout single off his 2009 self-titled debut. The record went platinum, as did its 2011 follow-up, ‘Outlaws Like Me,’ which yielded yet another #1 single with “If Heaven Wasn’t So Far Away.” In 2014, Moore landed the coveted New Artist of the Year trophy at the ACM Awards after releasing his critically acclaimed third album, ‘Off The Beaten Path,’ and in 2016, he dropped ‘Kinda Don’t Care,’ his third consecutive #1 record. The New York Times hailed Moore as proof that “old forms can stand even stronger with injections of new ideas,” while Billboard celebrated his “down-home personality and wry sense of humor,” and Rolling Stone praised the “upbeat mix of contemporary country and honest twang that he perfected.” Moore’s songs racked up more than a billion on-demand and programmed streams, and he performed everywhere from Kimmel to The Today Show in addition to headlining arenas and amphitheaters around the country.

About Jeremy Stover
“It all started with the love of music,” says Jeremy Stover as he looks back on the beginning of a very successful career which has led to hundreds of cuts, and many No. 1 hits as a writer and producer. Today that career continues to grow and is expanding into the next phase, as owner of publishing and entertainment company RED Creative Group.

Stover’s childhood in Ellijay, Georgia provided the inspiration for some of his most personal songs, which also turned out to be some of his biggest hits. He co-wrote “Small Town USA” and “Til My Last Day” with singer Justin Moore, and also produced the tracks. His string of success continues with numerous singles including Tim McGraw’s smash “How I'll Always Be” and Justin Moore’s “The Ones That Didn’t Make It Back Home,” Stover says, “There is so much of me in those songs, how I grew up and what I appreciate.”

About Rhett Akins
Rhett found his way to a professional music career when Decca Records (which had been reactivated then) heard one of his demos. He dropped his first album, A Thousand Memories, in 1995. The record was critically acclaimed and produced four chart singles including his first No. 1 hit, “That Ain’t My Truck,” which he also co-wrote. The song has since become Rhett’s signature song but his success story was just getting started. The following year he released Somebody New which produced another No. 1 hit, “Don’t Get Me Started.”

Overall Rhett has had an extremely impressive career. He's not just been a successful solo artist, he's also written chart-toppers for some big names. Rhett has had 30 No. 1 singles (and counting), which is remarkable!  Some of them include, Luke Bryan’s “I Don’t Want This Night to End and Huntin’ Fishin’ and Lovin’ Every Day,” Chris Young’s “I Can Take it From There,” Justin Moore’s “Point at You,”, Dustin Lynch’s “Mindreader” and Locash’s “I Know Somebody”.  Rhett’s also responsible for Blake Shelton’s “All About Tonight,” “Boys ‘Round Here” and “Honey Bee,” the latter of which spent a total of four weeks at No. 1. His Jason Aldean cuts include “When She Says Baby,” “Just Gettin’ Started” and “Tonight Looks Good on You.” He had another three week No. 1 with Thomas Rhett’s “It Goes Like This.” He also wrote TR’s “Get Me Some of That” and “Star Of The Show” which was co-written with, Thomas Rhett and their first No. 1 together.  In 2017, John Pardi’s “Dirt On My Boots” went No.1 and later that year, Dustin Lynch's "Small Town Boy" spent 4 weeks at #1 on Billboard. Rhett celebrated with Thomas Rhett and fellow co-writers his 29th number one, “Life Changes” in 2018 and his 30th #1 within the summer of 2019, “Look What God Gave Her”. In November of 2019, Rhett celebrated his 31st #1 with Brantley Gilbert’s “What Happens In A Small Town”.

This impressive list hasn't gone unnoticed in the music industry. Rhett has been the recipient of renowned awards and titles. In 2010, Rhett was named the No. 4 Billboard Country Songwriter. The following year, BMI named him Songwriter of the Year. He won it again in 2014. His song “Honey Bee” became the highest-selling digital debut by a country male solo artist. His biggest accomplishment, though, maybe winning the CMA Triple Play award a total of seven times! The award is presented to a songwriter who penned three No. 1 singles in 12 months and he won it in October 2010, January 2012, February 2014, February 2015, February 2016, February 2017, and again in February 2018! In April 2018 Rhett was named Songwriter of the Year and in September 2019 names the first Songwriter of the Decade by the Academy of Country Music.

About Chase McGill
A Columbus, MS native, Chase began taking piano lessons at the age of 5 and picked up a guitar at age 12. By the age of 15, McGill had joined his first rock band where he began playing shows at the local theaters and bars. He would spend the next 10 years in bands traveling the country, and eventually ending up in Nashville. Chase has maintained a consistent presence on country radio with singles “The Way I Talk” by Morgan Wallen, “When Someone Stops Loving You” by Little Big Town and scored his first 3 number one songs in 2018 with “Lose It” by Kane Brown, “Break Up In The End” by Cole Swindell, and “Sunrise, Sunburn, Sunset” by Luke Bryan. He is an ACM Award and Grammy Award nominee and winner of this year’s Nashville Songwriter Awards Song of the Year award with “Break Up In The End.”  Chase has played Tin Pan South and has expressed a desire to be more involved with NSAI.

About Ford Driving Skills for Life
Ford Driving Skills for Life was established in 2003 by Ford Motor Company Fund, the Governors Highway Safety Association, and a panel of safety experts to teach newly licensed teens and parents the necessary skills for safe driving beyond what they learn in standard driver education programs. Now in its fourteenth year, the basic premise behind Ford Driving Skills for Life is to provide a step in the learning process, providing new skills and information not currently shared with newly licensed drivers in the basic driver education courses. The program has trained more than 1 million individuals in safe driving practices. It is offered in 35 countries, and hands-on driving clinics have been conducted in all 50 U.S. states, Puerto Rico and the District of Columbia. For more information visit www.drivingskillsforlife.com.

About Ford Motor Company Fund
As the philanthropic arm of Ford Motor Company, Ford Fund’s mission is to strengthen communities and help make people’s lives better. Working with dealers and nonprofit partners in 63 countries, Ford Fund provides access to opportunities and resources that help people reach their full potential. Since 1949, Ford Fund has invested more than $2 billion in programs that support education, promote safe driving, enrich community life and encourage employee volunteering. For more information, visit www.fordfund.org or join us at @FordFund on  Facebook  and Twitter.

About Nashville Songwriters Association International (NSAI)
Established in 1967, the Nashville Songwriters Association International (NSAI) is the world’s largest not-for-profit songwriters trade organization and has a membership of more than 5,000 spanning the United States and eight (8) foreign countries. Consisting of a body of creative minds, including songwriters from all genres of music, professional and amateur, for over 52 years, NSAI has been committed to protecting the rights and future of the profession of songwriting, as well as carrying a commitment to educate, elevate and celebrate the songwriter, acting as a unifying force within the music community and the community at large. For more information, visit nashvillesongwriters.com.