1.       Mechanical Royalties – If your song sells (is on a record or CD that sells or is part of a subscription music service), that royalty is called a mechanical royalty.
a.       This law dates back to 1909 when it was first applied to player piano rolls. It is set by the government once every 5 years.
b.       Currently, that rate is set at 9.1 cents. It is split with any and all co-writer(s) on the song.
c.       Under the subscription service, it would be a percentage.
2.       Performance Royalties – the Performing Rights Organizations (PROs) collect these on your behalf (ASCAP, BMI, SESAC, and GMR) depending on who you affiliate with.
a.       They license and collect all performances (i.e. a live performance at a bar or concert venue, a streaming performance, a performance on the radio, or the song is performed in a movie or tv show that’s broadcast on television)
b.       All PROs do the same thing, but do it a little differently. They all have agreements that you need to read carefully and understand what you’re joining when you join them.
3.       Synchronization Rights/Fees – Technically not a royalty, this is the only rate that songwriters get to negotiate.
a.       That’s when you get a song placed in film or television and you get to negotiate what you get paid for that.
b.       There are some marketplace templates and norms, but again, anything can be negotiated.
c.       On top of that, you will still get a separate performance royalty payment every time it airs on broadcast television.

My song had a few spins on my local radio station. Why didn’t I get paid?

Performing Rights Organizations determine payments based on spins and because every radio station does not report every spin, it’s not uncommon not to get paid. Most radio stations that are mid-market or small-market have a week where they report everything they spin and that’s averaged in for the PROs’ millions and millions of spins. Streams you should be paid on for every stream, but your spins on the radio – you could get a few hundred or even a few thousand – and you may not actually get paid anything. Again, you need to check into the rules and regulations of the PRO you’re joining. It’s a question we get asked a lot and it’s not uncommon to get some spins, especially locally, and never see any performance money for that. You certainly won’t see any if you don’t join a PRO!

When you write a song, keep a record of when you wrote it and everything about it, including who you wrote it with when you finish it. Suppose that song becomes part of a publishing deal that you sign later. You get to recapture that publishing that you’re giving to the publisher 35 years after the day you wrote the song. But you can’t do it if you don’t keep records of it. There are some time/date stamp programs, like MasterWriter, that keep those for you.

When to file a copyright and other protections?

Time/date stamp programs or doing it yourself and keeping good records can serve as protection. Most professionals don’t copyright every song due to cost. Currently, there’s a $35 to register one song online with the U.S. Copyright Office. You can file them in a group as long as it’s the same group of cowriters for every song, but typically that’s not the case. Most professionals copyright their songs when they are commerced, so when they get cut, placed for sync, or other purposes. You can file them with your Performing Rights Organization at no charge and that’s an effective way to keep a record as well.

What if someone steals my song?

That can be a whole topic for another day, but my theory is to get your songs out there. Very rarely are songs stolen. It can happen sometimes, but a copyright doesn’t prevent that from happening. It gives you some protection in the event you want to sue someone for it, but there are other ways to do it. Here’s the bottom line: you have to make a personal determination depending on how much it costs. There are ways to protect your songs that don’t cost anything. I want to belabor this point one more time: I’m not saying don’t copyright your songs. I’m telling you typically what professionals do to guide you to make the judgement of whether it’s worth spending the money.

Don’t take somebody else’s melody and write your own lyrics to it. That’s copyright infringement. It’s fine to have influences. It’s not fine to steal. That’s a topic you should really research. We get asked a lot of questions about parodies. Even those aren’t crystal clear and different lawsuits have made different determinations. I can tell you this: in the professional songwriter community, it’s a no-no and you need to try to be original if you can.

One of the rights songwriters and their publishers have is the very first time a song is recorded, you get to grant the license. It’s the first use. You don’t have to let them record it if it’s an application you don’t approve of, but once you grant that first mechanical use license, anybody can record it, as long as they pay you. Most writers don’t know that. Anybody can record that song, once you grant the first use.

In Nashville, unless otherwise written, however many people are in the room, that’s how many ways the song is split. If it’s two people, it’s a 50/50 split. If there are three people in the room, each gets a third. Cowriting is rarely “co.” Professionals understand that typically, while they may exchange ideas and everybody contributes, on most days, somebody’s driving, somebody’s navigating or steering. No matter the contribution, even if it’s a word or sometimes even if it’s nothing, everybody splits the copyright evenly. The only time that doesn’t apply is when there’s an agreement beforehand. That might happen in the hip-hop world, for example. Somebody may be contributing a track and it’s negotiated on the front end that they get 5% or they’re getting paid a flat amount for that track. But unless there’s something negotiated upfront, it’s an equal split based upon the number of people in the room.

I finally get to write with a professional writer, but a few months later I get a bill for a demo. Why?

Expect that. The professional writer may demo the song and in the professional community, you are expected to pay for your share of it. If there’s any question about that, you need to address that before you write the song or before you leave the session, clarify if you should expect to pay for the demo.

You can put your song on there. We get links all the time to listen to people’s songs. Read the fine print. They’re all different, but on most of them, you are signing away some of your rights. You are either allowing uses that you may not be expecting, or in some cases de facto ownership for certain uses. Read the fine print! 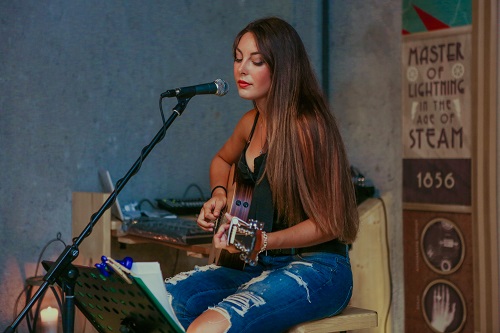