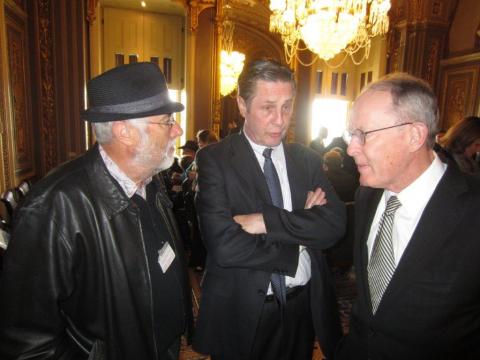 NASHVILLE, TN—The Music Modernization Act (MMA) was introduced today in the United States Senate.  The bill which makes several beneficial changes for songwriters in the way music is licensed and streaming rates are set continues to gain support.

“Songwriters will finally get a market-based mechanical rate standard, which should result in more equitable royalties from interactive streaming companies,” said Nashville Songwriters Association International (NSAI) President Steve Bogard.  “Until now, we have been tied to outdated rate standards Congress first adopted for player piano rolls back in 1909.  In addition, American songwriters will, for the first time, by law, receive at least half of all unclaimed digital mechanical royalties.  I want to extend my deepest thanks to all of our introducing Senate sponsors.  The Music Modernization Act represents the most significant copyright reform in a generation.”

“This bill puts music publishers and songwriters in control of the digital mechanical licensing process and brings a marketplace rate standard that should lead to higher streaming royalties,” said NSAI Executive Director Bart Herbison.  “And for the first time in history songwriters will receive more than half of unclaimed digital mechanical funds.  When you consider the streaming services have agreed to pay associated costs, the MMA is the most beneficial legislation for songwriters in the digital era.”

Herbison noted that this bill alone will not fix all royalty woes for songwriters associated with streaming activity, but calls in a “huge improvement”.

The bill includes:
• A new rate standard for songwriters’ digital mechanical streaming royalties.  The Copyright Royalty Board will be able to utilize the willing-buyer, willing-seller rate standard that should result in more equitable rates because it is based on what songs would be worth in a free market.

• Song ownership issues are addressed through a new blanket licensing entity called the MUSIC LICENSING COLLECTIVE.  Governed by music publishers and songwriters the Collective will assume responsibility for finding owners and keeping track of ownership data.  Digital services will be relieved from copyright infringement liability if they adhere to best practices.

• The U.S. Copyright Office mass “Notice of Intent” (NOI) program that created many burdens on songwriters and resulted in millions of dollars of unpaid royalties, will be eliminated.

• Songwriters will, for the first time, be legally entitled to at least half of all unclaimed funds from digital mechanicals to be equitably distributed based on songwriter activity.

• And ASCAP and BMI rate court judges will be randomly selected instead of being appointed for life. By eliminating Section 114i of the Copyright Act, those judges will be able to consider market factors like what record labels and artists earn for streaming performances.

“Senator Lamar Alexander reached out to me during the Christmas break in 2016,” said NSAI President Steve Bogard.  “He told me he wanted to do something ‘substantial’ for songwriters.  He gets my personal thanks along with all Senate and House sponsors of this legislation.”