What Does it Mean to be a Topline Songwriter? 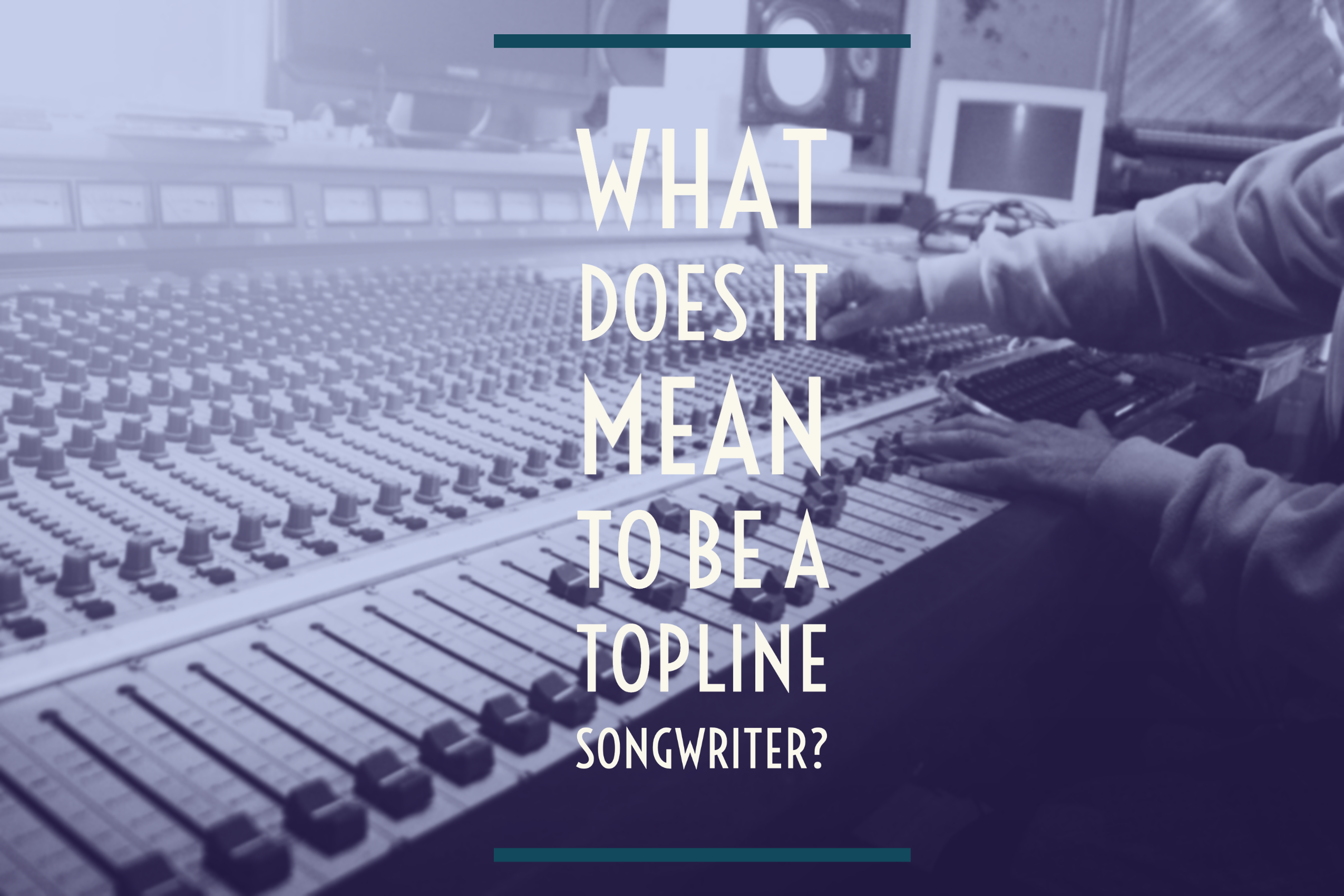 When I first started writing topline I didn’t realize it had a specific name. I simply thought of it as co-writing but after doing it for a while with some success, I came to understand the distinctions between traditional songwriting and topline songwriting, particularly when it comes to the creative process and the skills needed.

Yes, topline songwriting is a form of co-writing, but not in the traditional sense you’re probably familiar with, i.e. a couple of writers in a room or via Zoom creating a song together from the bottom up. Topline songwriters or topliners create the vocal melodies, harmonies, and lyrics to sit "on top" of a producer’s instrumental track, often referred to as ‘the beat’.

For more than a decade, songwriter-producers have dominated commercial pop, hip-hop, and dance music, with topliners emerging alongside, adding the crucial elements that make a song, A SONG. The majority of mainstream releases are a collaboration between producer(s) and topline writer(s). The producer sends an instrumental track with a clearly defined song structure, for example:

The musical bed has already been created. The genre, rhythm, tonality, style, mood, and vibe are the guide.  It’s now the topliner’s job to turn the instrumental into a great song and sometimes it just clicks!

“If I listen to a good instrumental, the lyrics and melody write themselves. Most notably was a song called "Falling Hard" for The Crystal Method. I wrote that one in about 10 minutes after I was sent it in an email, first thing in the morning. I actually wrote it on the inside of a cereal box because I was out of paper.” - Meiko (Singer/Songwriter, Independent Recording Artist)

The instrumental will obviously dictate where the topliner can go, but other than that, it’s like writing any song. Typically, I’ll start with the verse or chorus melody by singing gibberish “oohs”, “ahs”, and other made up words over the instrumental track. When an interesting word or phrase comes out I start to build around it. Of course, what works for me won’t necessarily work for you, but you’ll develop your own approach.

“When it comes to topline writing, I always start with the essence of the song, the hook, because everything else follows after. It’s almost like telling a story where you get to the point of the story first and then you elaborate the details after through production verses and so on.” - VASSY (Singer/Songwriter, RIAA certified Platinum & Gold Recording Artist)

Once the vocal melody and lyric are fleshed out, the topliner will record a demo and send it back for approval.  If the producer digs it, they’ll usually ask for the vocal stems to further flesh out the production, adding additional sound design and fairy dust before shopping it to a publisher, label, or major artist.

On occasion, a producer might not send a fully cohesive instrumental, but more of an idea or rough template. They may send a verse and chorus, or sometimes a simple loop.  In those situations, the producer is hoping the topline writer will be inspired enough to get an initial idea going and the process may go back and forth more similarly to a traditional co-write.

Aside from crafting memorable hooks and lyrics, successful topliners are almost always professional vocalists or recording artists in their own right with the capability of delivering not only a great song but a polished vocal performance as well.

I can tell you from personal experience, that having the ability to sing and record yourself is pretty much essential. It doesn’t mean you can’t write topline, but it does mean you'll be limited in obtaining professional topline opportunities.  Nearly every commercial release I’ve toplined was released with my vocals as the featured artist. In the case where one of my toplines was picked up by another artist, the producer still used my background vocals in the track (without attribution, but that’s a story for another time...)

I say all of this not to discourage anyone from trying to become a topline songwriter, but to set realistic expectations and encourage you to develop the skills you’ll need to be successful in this demanding and fast-paced side of songwriting.

There are several ways to get paid, you can either A) get paid up-front in a work-for-hire scenario, foregoing any future royalties B) work on spec, no up-front payment, typically with a 50/50 royalty split on the publishing, or C) a combination of the two.

Depending on the producer and my level of confidence that the song will generate real income, I’m more likely to work on spec. In general, I’m not a fan of giving up on future royalties, if the song becomes a hit or gets used in a film, Netflix series, or a commercial years later, I’d be kicking myself for giving up on that income.  If my vocals are being used in the final release, I’ll also take a percentage on the master recording royalty.

When you're first cutting your teeth as a topline writer, you’re most likely going to find yourself working on spec, unless you list your services on a provider platform like Soundbetter, where you can set your rates.  I recommend setting a reasonable up-front flat rate and leaving some wiggle room for negotiating royalty splits because if the song becomes a hit, you’ll be missing out if you give up all of your publishing rights.

Ready to take a stab at toplining but not sure where to start?

Britt Daley is a singer-songwriter, topline writer, vocal producer, and recording artist.  She has released one studio album, Daydreams & Movie Scenes (2017) with her single, "Make It Right" landing at #25 on Spotify's Global Viral 50 and United States Viral 50 Charts.  She frequently collaborates with EDM producers and is the featured vocalist on multiple dance releases, including #1 Mediabase Dance Radio single, "Running Wild" with Grammy-nominated Producer, Morgan Page.  Her songs have been featured on  MTV, The Wendy Williams Show, NBC's TODAY, FOX, Freeform, and Nike Training Club.