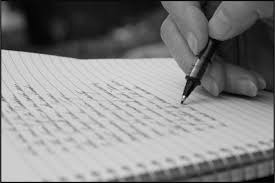 Most of songwriting is based on a desire to share stories, a drive to get up and work at it every day, and pure talent. However, there are still opportunities to “learn” a few tricks of the trade along the way. This week, we’re examining some of the common lyrical missteps the Membership team at NSAI comes across often, and how you can avoid them!

It’s not something someone would naturally say
Sometimes in the pursuit of creativity and cleverness we lose sight of something obvious: the lyric doesn’t sound like a sentence anyone would say. If you’re trying to convey a message, straightforward and conversational lyrics will do better than confusing or disjointed phrases. You could argue the opposite, but as a general rule of thumb, being up-front with your lyrics will yield better results. Humans can sense when something in a song feels “off,” and an unnatural sentence structure can be off-putting.
Our suggestion: Consider what emotions you want the song to evoke, who your audience might be, and who the artist is that you want singing the song (if it isn’t yourself). Read your lyrics aloud. Would you say that sentence in a conversation? Does it sound weird? Rethink it and make edits. (Note: if “odd” or “weird” is what you’re going for, throw this suggestion out!)

You’re trying to say too much in one song
The songwriter’s brain has a ton of ideas coming out at any given moment, which is amazing… except when you try to throw them all into one song. Putting too many different ideas, “plot points,” or stories into one 3-to-5 minute song is a recipe for confusing your audience. Depending on your genre, staying consistent with your lyrical content based on a central theme or idea is the best way to make a coherent and enjoyable song. Much like our first point, listeners can sense when something feels “off,” and trying to write about eight different things in one song will absolutely cause those “off” Spidey senses to tingle.
Our suggestion: Pick one idea and stick with it. Reserve the other ideas for all the other hits you’re going to write.

You use too many clichés and predictable rhymes
This might be different for some listeners, but if I can easily predict what the next line in a song will be, you’ve lost me. When you can see what’s coming before you even get there, it’s a bit of a let-down. The same goes with clichés – nothing makes me tune out quicker than something that has been said a million times.
There are only so many topics about which to write songs. Whether it’s about love, anger, hurt, longing, happiness…all songs fall into a broad category like that. What sets professional songwriters apart from amateur songwriters is that the professional songwriters know how to take the same themes and write lyrics that not only express what the song’s meaning is, but does it in a way that others haven’t done before. The same goes for predictable rhymes; pro writers have expanded their knowledge through practice, books, and learning from others. This extra bit of work results in the ability to pick from a larger pool of words, which ultimately expands their rhyming capabilities.
Our suggestion: Take some time and read a bit more. Do an internet search for synonyms of words you’d like to use. Listen to what lyrics are being written in your genre and see if there are any phrases that come up all the time (example: blue-jean, solo cup, Friday night lights, whiskey-anything) and avoid them. If your song needs any of these elements, go back to the first suggestion and find a better way to say it. An ability to be innovative with your words while being direct and meaningful is what sets apart the pros from the amateurs.

You’re lacking a hook
Do you want people to keep coming back to your song? You’ve GOT to hook them. There are a handful of examples that tells us the complete opposite, which is fine, but in general, songs with clearly defined hooks are the songs we remember (whether the hooks are melodic or lyrical). Memorable songs can mean a lot of things; however, wanting to hear that song over and over or wanting to hear more music from that artist/writer are two of the main ways that a memorable song can benefit you.
The hook doesn’t necessarily have a “correct” spot in a song, but in most memorable songs it is found in the chorus at the beginning or the ending, or sometimes repeated at both beginning and ending.
If a hook isn’t already what has inspired you to write the song, there is still a chance to come up with an effective one. Remember to keep it simple, memorable, and, lyrically speaking, use a sentence that ties the song together.
Our suggestion: Is there a phrase that you use frequently in your song? That’s likely the hook. If you haven’t gotten that far in your song’s development and are wanting a lyrical hook (as opposed to instrumental), remember to keep it simple, memorable, and use a sentence that ties the song together.

You’re too specific
The great thing about writing songs from personal stories is that you’re able to put the experience into words to form a song that you think others may be able to relate to. However, once you roam into the “too specific” territory, you can potentially confuse or, even worse, lose your audience. What do I mean?
I was driving down Simpson’s Hollow Road
on my way back to 216 Main
when I saw Angela walking by

Uhh…where is Simpson’s Hollow Road? Should the listener know this already? What’s 216 Main? A bar? Your house? Who’s Angela? Where are we? What’s going on?!

When you throw in specific places and names that aren’t 1) famous (city names, notable monuments, important places in your specific genre, etc.) or 2) names of the subject in your song (Angie, Rosanna, Beth, Layla, Barbra Ann…. you get it), you’ve introduced confusion and a lack of context into your song. Listeners crave a storyline or narrative they can follow. While a person, place, or thing that is mentioned in your song may be important to YOU, the song isn’t about YOU. As a songwriter, you’re writing the soundtrack to the lives of others; your message needs to be relatable to a broad audience.

So let’s try that example again in a more relatable version:

Our suggestion: Be descriptive, but not so specific that your audience cannot relate. Avoid using exact locations or names in your songs unless you’re the artist and that’s what you’re singing about. If you’re trying to write songs for another artist to cut, the locations or people you mention may cause the song to be considered a “narrow cut”- meaning fewer artists might consider singing it. Remember, there are no absolutes in songwriting, only suggestions.