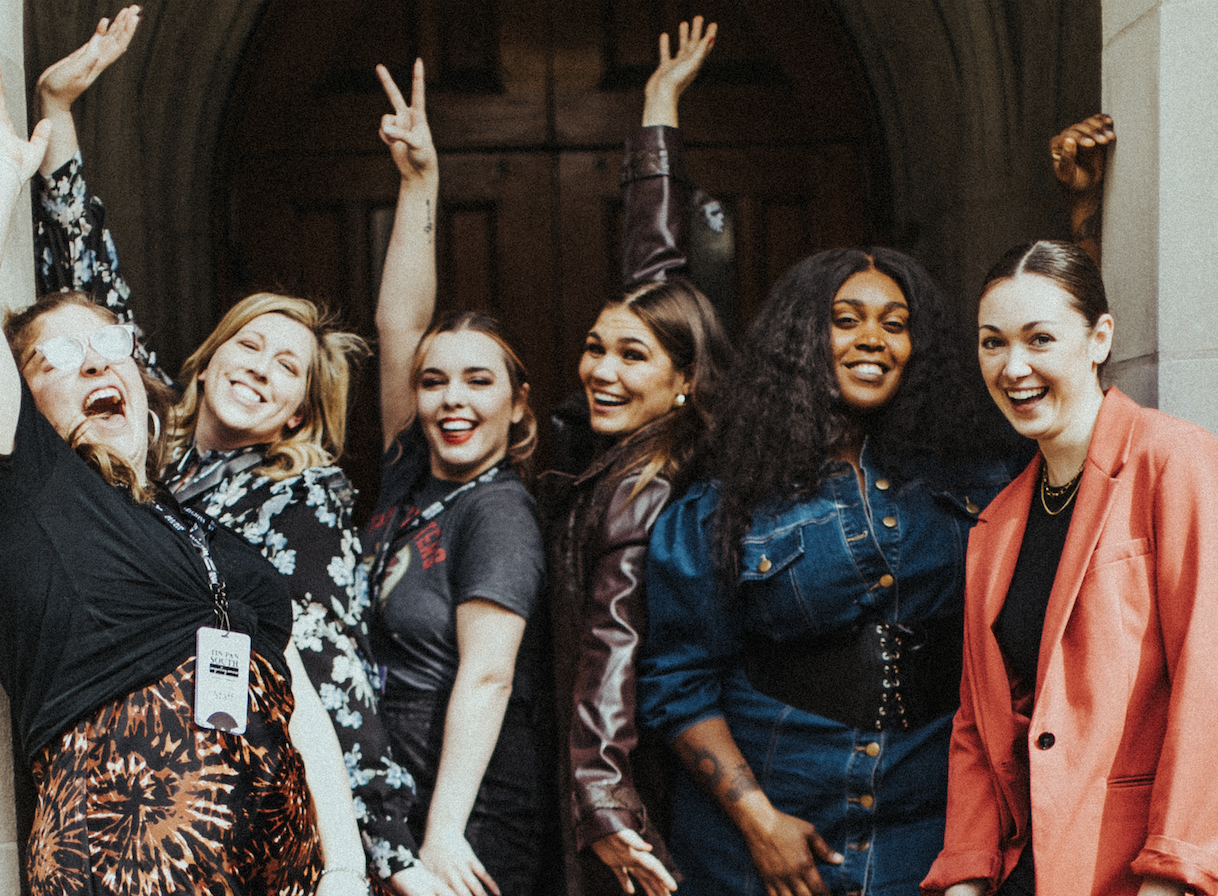 Educational, inspirational, and eye-opening; all words used by our Tin Pan South Songwriting Seminar 2022 attendees to describe our first in-person event since March 2020. What a whirlwind two days it was!

It was incredible to see the majority of you in the flesh for the first time ever - and we were thrilled to see that many of you finally got to meet each other, connecting with cowriters you'd only been able to spend time with via Zoom thus far. It was so cool to host an event where you were able to connect, learn, and be inspired.

I joined the NSAI staff about 8 months ago. Shortly after, I was tasked with putting on this event. With no prior knowledge of it, I resorted to thinking about who I would want to learn from if I were in an attendee’s seat. I pulled out a list of people who have inspired me to step into the music industry, professionals whose careers I have looked up to, songwriters whose journeys I have followed, and whose songs I have jammed out to during poignant times of my life. I’m still trying to figure it out, but somehow, everyone said 'Yes.' This is probably due in equal parts to how amazing these individuals are, how much the Nashville community really does want to see each other thrive, and the profound importance of NSAI's mission. After all, NSAI started because its founders knew that songwriters deserved to be recognized. Since 1967, we have continued to advocate for, nurture and educate songwriters at every level of experience. However, the work we do cannot be done without the amazing Nashville music community that we are so lucky to be a part of.

We kicked off the event with the amazing Jimmy Yeary, who motivated and excited everyone. Once his segment was over, we had attendees coming up exclaiming “If that was the only segment in this whole 2-day seminar, it was worth the money." Talk about getting off on the right foot! Immediately following, we had the incredibly knowledgeable panel of publishers comprised of Beth Laird, Will Overton, and Robin Palmer, who made everyone’s hands cramp up from taking such meticulous notes. You could look out and see pens racing across the paper as they tried to take in every bit of information and insight given from their years of experience. [A much-needed lunch break occurred in Scarritt Bennett’s apparently very-Harry-Potter-like dining hall shortly after. I can’t say I know Harry Potter too well, but I’ve been told it gives off similar vibes. Apologies for not bringing a sorting hat to the event…there's always next year!] 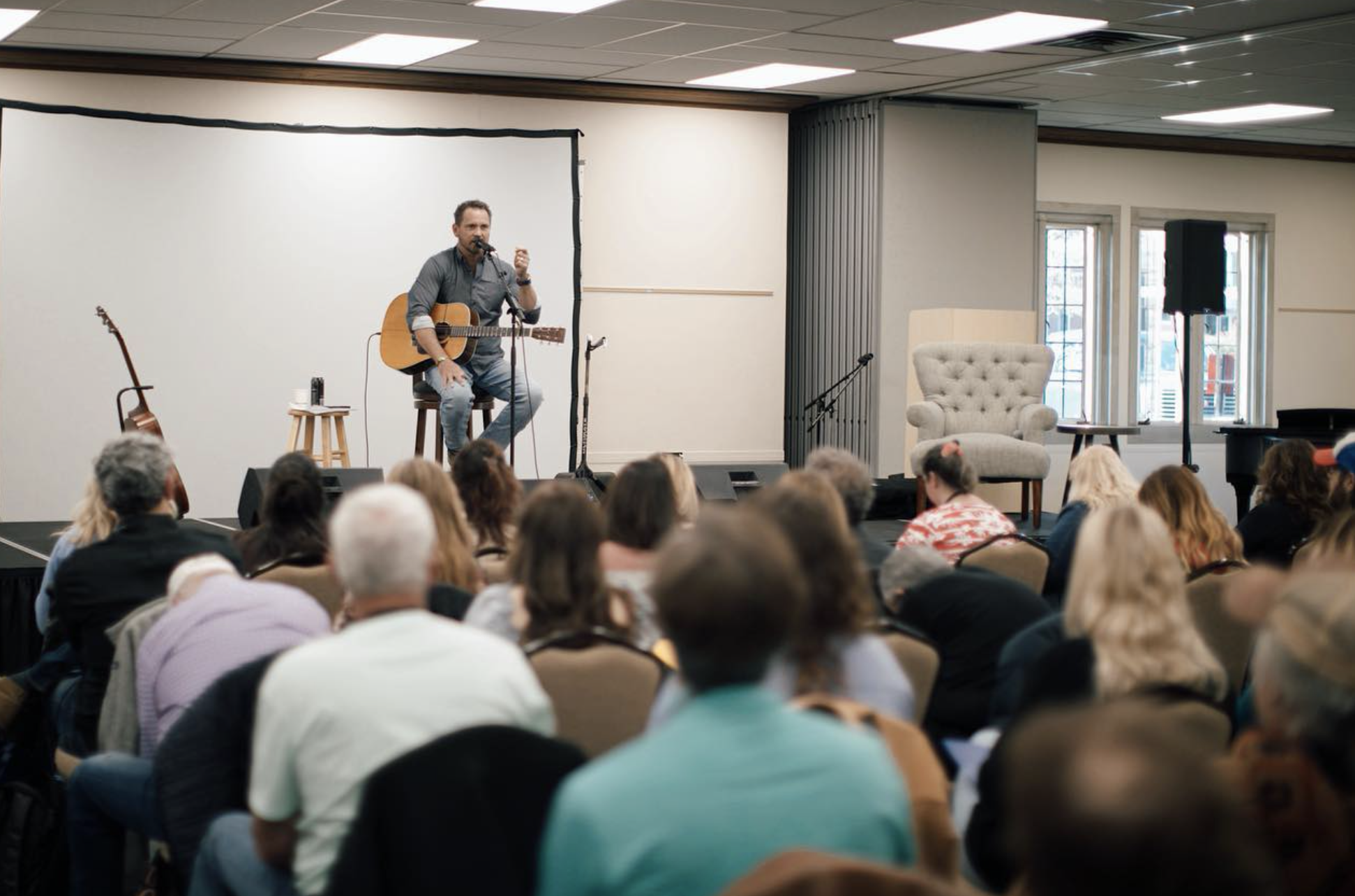 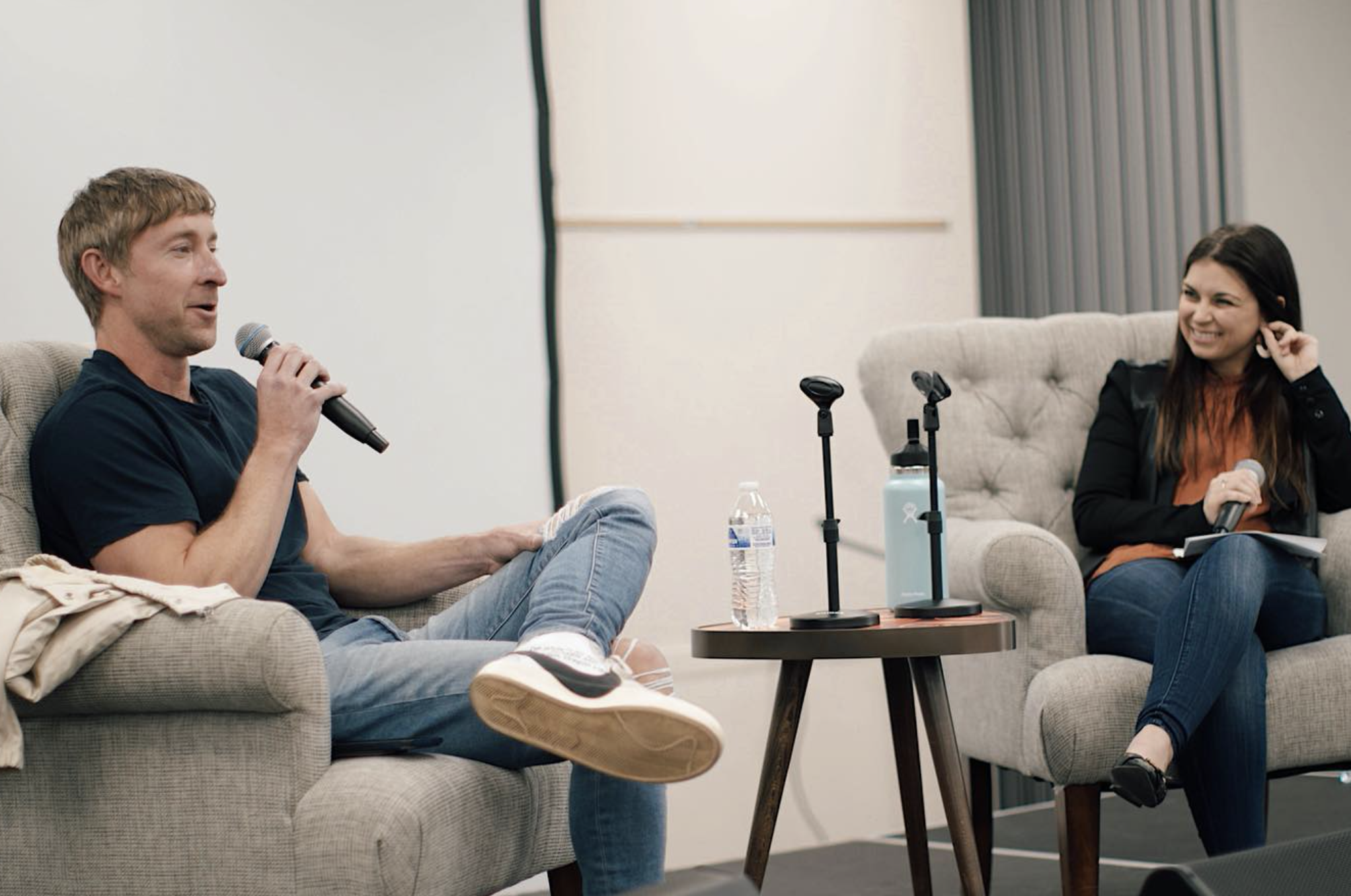 After lunch (and a quick run across the campus because we were all so excited to see each other and talk that we ran out of time), we had an amazing segment with Ashley Gorley where he let us in on The Science Behind a Song. The songwriter with a cool 58 #1's under his belt schooled us all and left us high in the clouds. He even played his most recent number 1, Sand in My Boots. I’m sure by the time this is published it will be an even 60 number ones. As if his segment didn’t send us into the clouds enough, we were then shot into the stratosphere with an incredible panel comprised of Jordan Reynolds, Ethan Hulse, and Jon Nite who talked about writing commercial songs. However, we were not aware we would also be treated to a comedy skit. These guys taught us so much about the different markets while also referring to characters Becky and Bucky to describe differences between writing for different genres. At the end the first day, we had the amazing Barry Dean come out to talk to us about his journey as an NSAI member trying to make songwriting his career. Spoiler alert…he did. Grammy-nominated songwriter Barry Dean told us so many stories, and gave so many incredible pieces of advice. It was all the motivation anyone needed to feel like they too can write number one songs and have their first cut be with Reba. Note: We are bragging on Barry because he is one of the humblest and most kindhearted individuals in the industry. He is making such a difference in people's lives - not just through music, but through his company LUCI. Google it as soon as you can.

*I was told I could make this as long as I wanted because it was going to be a blog post. Sooooo if you’re bored or tired and don’t want to keep reading, email savannah@nashvillesongwriters.com for the SparkNotes version. Seriously people, e-mail her and fill up her inbox!...mainly to say how incredible she is.*

We started Day 2 with a nice breakfast and networking hour before separating into our first breakout sessions of the day.

During the first block, we had Caitlyn Smith and Gordie Sampson rock our world talking about craft while breaking down some of their amazing songs. Caitlyn's voice at 9am is equal parts astonishing and unfair.

In the other room, we had Josh Osborne and JT Harding front and center making us cry from laughing so hard as they talked to us about co-writing. Who knew we were actually at Zanies? Educational and hilarious are our favorite kind of segments. They left us raring to get into a room with some of our newfound collaborators. 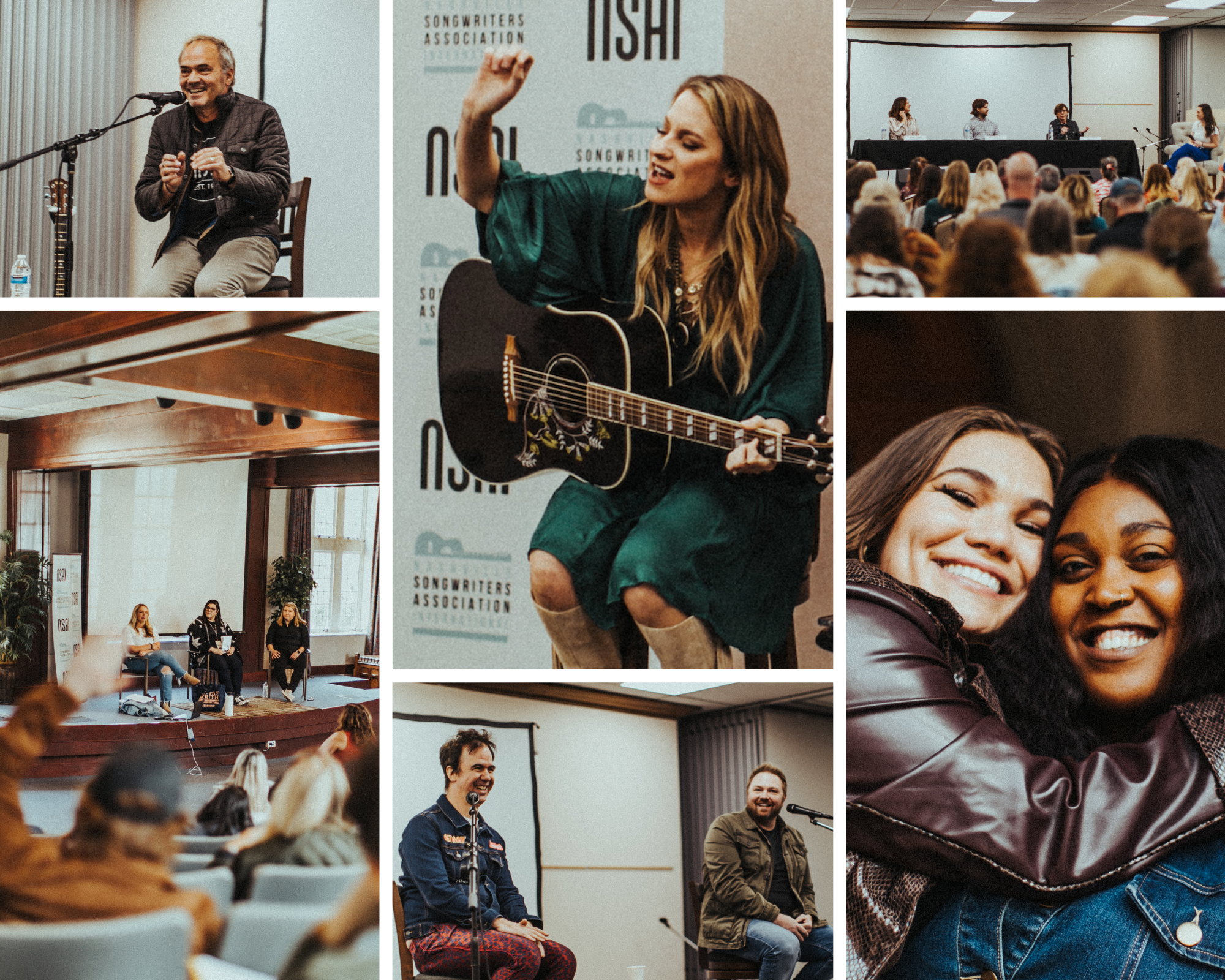 In the next room, we had Katie Jelen talking about all things sync. This topic was hugely in demand, and we were ready for it to GET LOUD. Note: This is in reference to her placing the Get Loud Titans song. This is me plugging how great she is.

What did get loud was the lawn mowers, so thank you to everyone who was patient with the grass-grooming happening outside. Maybe it even inspired you to come up with a song for a sync placement for a lawn care company!

Back to the real stuff: Both thorough and insightful, our attendees left that session ready to write their next song for film and TV and broaden the scope of what they can do with their songwriting career. In our second wave of breakout sessions, we had NSAI's Executive Director Bart Herbison teaching Music Business 101. With an open discussion conversation, attendees were able to ask their most burning questions and learn more about the advocacy work NSAI is doing! In the other room, we had Marcus Hummon enlightening us on how we can elevate our songwriting. I mean c'mon…no one is better suited than the man that wrote Cowboy Take Me Away and God Bless the Broken Road. Our ears even got a treat with some live performances! Across the courtyard, we had Stephanie Davenport and Amanda Quinto talking about the ever-popular topic of social media and how songwriters and artists can use it to their advantage. They were so eloquent and knowledgeable and ready to answer all our attendees’ questions. They even came prepared with examples! What a great way to learn from the experts.

After lunch, we continued with Stories Behind the Songwriter featuring Jimmy Robbins, Abby Anderson, and Brittney Spencer. They spoke directly to our attendees, being as real as can be about the struggles in their journeys, giving great advice based on their own experience navigating the industry. No matter where you are in your career, even if you have a million number ones, it's still a journey.

For our last segment of Seminar 2022, we had Ari Herstand come and talk about The New Music Business. He opened our eyes as he talked about NFTs, TikTok, and so much more.

But wait!
It wasn’t really the end. To truly end the day, we had Lee Thomas Miller come and surprise everyone by singing a few tunes. Then it was a mad dash to pick up everything, load it in trucks, and get over to Elliston Place Soda Shop to hear the 'Best of Seminar' round at 9pm!

…geeze, so many incredible segments happened. We would love to hear about your favorite parts! Feel free to comment below (if it is an option. I’m not sure if it will be on the website, as I am typing this into Microsoft Word. If it is not an option, don’t fret. Feel free to send your favorite moment via carrier pigeon or telepathic thought.)

Well, you’ve made it this far. If this was Facebook and you made it this far, there would be some sort of plot twist that says "if you made it this far, you are the real MVP!" and to post this as your status and tag people. Instead of doing that, please follow our social media accounts, and email all of our amazing staff to tell them how amazing they are - because as someone who works with them, they really are. Also feel free to tell your friends about us and give some shameless plugs (because as a not-for-profit, everything we do is for you anyway!). If this part stays in, then Savannah (who told me to write this) agrees..and she's the boss, so go do it.