Rise up with NSAI's Remote Interactive Songwriting Education program!
This five-week virtual course will help you navigateyour songwriting ambitions,
discover new methods of diving into the craft, all while connecting with fellow songwriters
and industry professionals online! 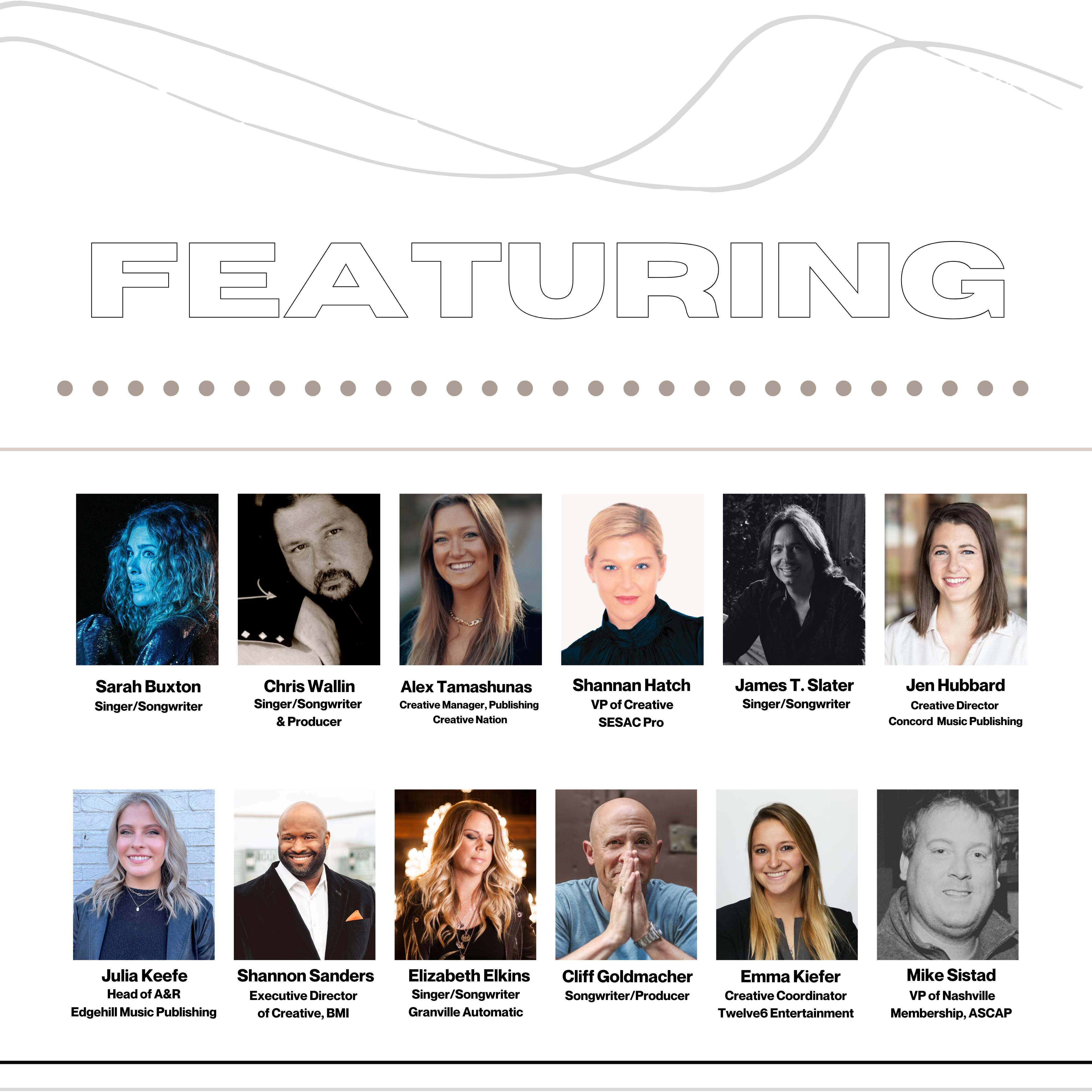 Sarah Buxton:
A singer’s singer who’s lent her signature ethereal grit to projects for a range of artists from Miranda Lambert to Dierks Bentley to David Nail to Blake Shelton to Will Hoge, Buxton has also written songs for a list that’s equally impressive: Keith Urban, Florida Georgia Line, Big & Rich, Gary Allan, Trisha Yearwood, Caitlyn Smith, Sarah Jarosz, Reba McEntire, Harry Connick Jr., Dan Tyminski, and more. She’s sung on records for Urban, Florida Georgia Line, McBride, Smith, Tyminski, and numerous others as well––evidence of a telling pattern: When discerning ears hear her voice singing her song, they want to incorporate as much of Buxton’s magic into their own version as possible. Buxton has also contributed songs to hit TV series such as Nashville, for which she and co-writer Kate York earned an Emmy nomination.


Chris Wallin:
With his unique gift for finding the extraordinary in ordinary life, Chris Wallin has established himself as one of Nashville’s most sought-after songwriters. For years, Wallin has topped the charts with classics-in-the-making for the industry’s biggest stars: “Love Me If You Can” by Toby Keith, “Don’t Blink” by Kenny Chesney, ”People Loving People” by Garth Brooks, “I’m Tryin’” for Trace Adkins, “Something To Be Proud Of” and “Speed” by Montgomery Gentry and many more.

Alex Tamashunas:
Alex Tamashunas hails from Mt. Holly, New Jersey. Graduating top of her class from NYU, she quickly found a job in music journalism and PR. Shortly thereafter, she realized she wanted to be closer to songwriting and the people behind it. In 2018 she moved to Nashville, TN for a music publishing job with Anthem Entertainment where she worked with the likes of Jordan Davis, Chris Janson, Brian Davis and more... In October 2021, Alex accepted a position as one of the lead creatives at Creative Nation.

As a gifted songwriter advocate, Hatch and her team are responsible for the recruitment, signing and nurturing of songwriters and publishers as well as the retention of existing SESAC-affiliated writers and publishers. During her time with SESAC, Hatch has worked closely with affiliates Jimmie Allen, Lee Brice, Jamey Johnson, Runaway June, Craig Campbell, Matt McGinn, Josh Hoge, Jesse Lee, Richard Leigh, Jaron Boyer, Cary Barlowe, Lance Miller, Monty Powell, Michael Tyler, along with Americana tunesmiths Hayes Carll, Jim Lauderdale, and Allison Moorer, among many others.

Jen Hubbard:
Jen Hubbard is the Creative Director, Publishing with Concord’s music publishing division, based in Nashville, TN.  Hubbard began her career with Razor & Tie in 2014, where she served as Creative Coordinator, and then Creative Manager.  Currently, Jen is responsible for assisting in the procurement and management of the songwriter roster, as well as the exploitation of the publishing catalog out of Concord’s Nashville office.

Julia Keefe:
Julia Keefe is an A&R and publishing creative based in Nashville, TN. While attending Belmont University for a music business degree, Julia honed her A&R skills through a number of publishing and A&R internships. Through this, Julia began to work with Altadena, a publishing, label and artist development company founded by the late songwriter/producer busbee, where she was hired during her last semester of college. She spent three years at Altadena working with artists such as Carly Pearce, Ryan Griffin, Lindsey Lomis, Carter Faith, Riley Roth, and many more between Nashville and LA. Currently, Julia is now working as Head of A&R at Edgehill Music Publishing, running creative point on the growing, multi-genre roster.


Shannon Sanders:
Shannon Sanders is Executive Director, Creative at Broadcast Music, Inc. (BMI) based in the Company’s Nashville office. In this role, Sanders is responsible for signing and developing top talent and also supporting BMI’s extensive family of songwriters and publishers.  Creating and participating in educational, networking and showcase events specifically designed to promote awareness, he elevates up-and-coming and established songwriters alike.

As a 25-year music industry veteran, Sanders joins BMI as a two-time GRAMMY, three-time Emmy, and Dove Award-winning songwriter/producer with an ear for current trends as well as an appreciation of legacy artists. He is the founder and original Program Director of Nashville’s 102.1 The VILLE, a classic soul and R&B radio station that is committed to playing local artists. Additionally, he has served as the co-musical director for India.Arie, as well as the Fisk Jubilee Singers.


Elizabeth Elkins:
Elizabeth Elkins is a songwriter, singer and guitar player. She has more than 100 cuts in country, rock and pop including songs recorded by Billy Currington (Top 30 Country) and Kira Isabella (Top 15 Country Canada). Her songs have appeared in dozens of television shows and films. She recently wrote at BMG Nashville, and is also half of the country duo Granville Automatic, whose book Hidden History of Music Row was called the Best Book of 2020 by No Depression. Her biography of Nashville’s Timothy Demonbreun will be published by Vanderbilt University Press in 2022. She’s been featured in Rolling Stone, American Songwriter, The New York Times and many more. Her longtime rock project is The Swear.

Elizabeth served on the Board of the Atlanta Chapter of the Recording Academy and as President of Historic Nashville, Inc. She is proud to be a Gibson Guitars artist.

Cliff Goldmacher:
In the music business for over twenty-five years, GRAMMY-recognized songwriter, Cliff Goldmacher is also a producer, engineer, author and owner of recording studios in Nashville, Tennessee and Sonoma, California. A multi-instrumentalist and session musician, Cliff has recorded, played on and produced thousands of recordings for major and independent publishers, record labels, from up and coming songwriters to GRAMMY winners. Cliff has worked as a staff songwriter for a major Nashville publisher and his songwriting collaborators include multi-platinum selling and Grammy winning artists Ke$ha, Keb’ Mo’, Mickey Hart (Grateful Dead), Chris Barron (Spin Doctors) & Lisa Loeb. Cliff ’s songs have been cut by major label artists in genres ranging from country, pop and jazz to classical crossover. His music has also been used on NPR’s “This American Life” and in national advertising campaigns. Along with multiple songs in the top 40 on the jazz charts, Cliff ’s song "Till You Come To Me,” went to #1. Most recently, Cliff ’s song “Cold Outside” - a collaboration with Keb’ Mo’ - was included on Keb’ Mo’s GRAMMY-winning album, “Oklahoma.”


Emma Keifer:
Emma Kiefer is a 24-year-old Nashville-based, Boston-born Music Publisher and Manager. Her favorite genres include Country, Indie-Pop, Pop, Alternative, and Soft Rock. After graduating from Berklee College of Music with a Songwriting degree, and Boston College with a Philosophy, Management, and History degree, she went on to cut her teeth by working under Dave Cobb in production management, publishing, and A&R. Now, she is pursuing publishing full-time at Twelve6 Entertainment, with creators such as Jerry Flowers, Trevor Rosen,  Alex Hall, Roman Alexander, Jared Keim, Michael Lotten, Emma Klein, and AJ Babcock.

Mike Sistad:
Originally from Minnesota, Mike Sistad has worked on both the creative and business sides of the music industry.  As a musician, he has performed across most of North America, including stops at the Houston Rodeo and Calgary Stampede, as well as radio and TV performances including Garrison Keillor’s “A Prairie Home Companion” and the Grand Ole Opry.  A Belmont University graduate, Mike has worked with legendary Muscle Shoals producer/musician Barry Beckett; as an A&R executive for Tim DuBois and Mike Dungan with Arista Records Nashville; and as a band member for 2-time ASCAP Country Songwriter/Artist of the Year Phil Vassar.  In 2001, Connie Bradley enlisted Mike to join the ASCAP Membership team.  In his current role as VP-Nashville Membership, Mike continues to work with all aspects of the music industry as it pertains to songwriters, artists & publishing companies.  Successes include Chris Stapleton, Kelsea Ballerini, Old Dominion, Brothers Osborne, Carly Pearce and many others.  Sistad has previously served as both a Board Governor and Chapter Advisor for the Nashville Chapter of the Recording Academy in addition to being an AIMP Nashville board member, CMA, ACM member and Leadership Music alumni.