One thing I feel like people always ask me when I say, “yes, I am an artist” is- “So, like what is your thing?”

By thing- they mean branding. It took me a while to figure that out. They are really asking is, "What makes you unique, different from everyone else, how can you be defined in a couple of words, etc."

When I first decided I was going to finally say I was an artist, I thought branding yourself meant choosing a couple of things to put your stamp on.

You can fake the things that you like, but at the end of the day the best branding, is the branding that is authentic to who you are as a person.

Not only what you wear needs to be an image of who you want to be as an artist, but additionally all of the songs you choose to sing and all of the pictures that you post on social media.

I am still learning to juggle all of the above!

I think the best way as an ARTIST to figure out branding yourself, is to:

1. Realize you don’t have to plan out everything at one time. Brainstorm. Come up with branding Ideas for 1 song. Release just that 1 song. It is baby steps.
2. Do research of other artists who are killing the branding game. Take notes.
3. Write down words that describe you and your music. That will get the juices flowing. (for me it does.)
4. Think out of the box and create new ways to do things that are relatable to you.
5. Don’t spend tons of money. You can download tons of free apps that can do a lot of awesome things. Start there.
6. Don’t halfway do anything. If you are going to release anything or post anything, let it be your best quality.

I think branding for a SONGWRITER is a little different. I DO think you need to have a social media presence just because of how hands-on it is today.
Post about your shows. Make everything cohesive and look great, but ultimately- the songs will speak for themselves. 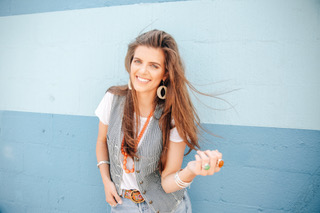 Raised in sweet home Alabama, Regan Stewart grew up dancing and singing along to country music. She began writing songs at the age of 8 and moved to Nashville in 2014 to pursue a career in music.
She has quickly made her name in Nashville after joining the female-driven songwriter’s showcase called Song Suffragettes, which has led to her being featured in Rolling Stone, Taste of Country, CMT, and many others.

Stewart has spent most of this year writing songs and working on new music that highlights her country roots with many of the influences she grew up on. Her first single, “Stereotypical Girls,” was released in July 2018, and her second single is set to come out November 16th. She is also one of the upcoming contestants on the new television show, “Real Country”, premiering November 13th on USA Network.