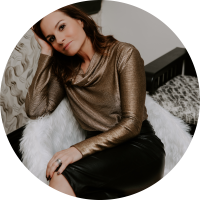 This workshop will be featuring hit songwriter, Kara Dioguardi! Kara will be giving advice on how to grow your business as a songwriter!  This workshop is pre recorded and will be posted at 5:45pm CT.

DioGuardi has collaborated with some of the most iconic pop music artists in the world, including P!nk, Katy Perry, Celine Dion, Kelly Clarkson, Britney Spears, Miley Cyrus, and Demi Lovato, among many others.  Her credits include more than 320 songs released by major labels, 150 of which landed on RIAA Platinum albums, and more than 50 charting singles, cumulatively surpassing one billion streams.

DioGuardi has played several roles throughout her career in the music industry, including music producer and label executive. As Executive Vice President at Warner Brothers Records, she signed RIAA platinum artist Jason Derulo.  Outside of the music industry, she is a published author and Broadway actress, starring in 2011 as Roxie Hart in the Tony Award-winning revival of Chicago.

DioGuardi continued a love for developing new talent as a judge on seasons 8 and 9 of the hit FOX show, “American Idol.”  Today, she continues to coach budding songwriters as the Herb Alpert Visiting Scholar at Berklee College of Music, where she has taught for the last eight years.

A steadfast believer in the power of music and the arts, DioGuardi created and funded the Phoenix Rising Music Program at Phoenix House, a non-profit organization dedicated to leading individuals, families and communities affected by addiction from disrupted to productive lives. As part of the program, she oversaw the construction of five recording studios at various Phoenix House locations.

In 2016, DioGuardi co-founded Inspired Nation, a non-profit that aims to give young aspiring artists a platform to tell their stories. Through various programs, Inspired Nation seeks to  develop their voices, empower them, and give them the ability to help others in their generation. All of the proceeds from Inspired Nation’s singing competitions benefit youth-focused charities.

DioGuardi graduated from Duke University in 1992 and prior to her songwriting career worked at Billboard Magazine for 5 years as an assistant, writer, marketing and sales executive. She presently serves on 5 boards, including the MLC and NMPA S.O.N.G.S. boards.

Link will be available on June 30th to watcha pre-recorded video.