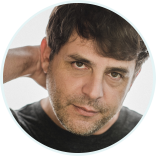 Rhett found his way to a professional music career when Decca Records (which had been reactivated then) heard one of his demos. The label was impressed with the singer and quickly signed him in the mid 90s. He dropped his first album, A Thousand Memories, in 1995. The record was critically acclaimed and produced four chart singles including his first No. 1 hit, “That Ain’t My Truck,” which he also co-wrote. The song has since become Rhett’s signature song but his success story was just getting started. The following year he released Somebody New which produced another No. 1 hit, “Don’t Get Me Started.”

Overall Rhett has had an extremely impressive career. He's not just been a successful solo artist, he's also written chart toppers for some big names. Rhett has had 28 No. 1 singles (and counting), which is remarkable! He’s had a hand in Josh Turner’s “All Over Me,” Joe Nichols’ “Gimme That Girl,” Brooks & Dunn’s “Put a Girl in It,” Rodney Atkins’ “Take a Back Road,” Luke Bryan’s “I Don’t Want This Night to End and Huntin’ Fishin’ and Lovin’ Every Day,” Chris Young’s “I Can Take it From There,” Justin Moore’s “Point at You,” Billy Currington’s “Hey Girl”, Dustin Lynch’s “Mindreader”,  Frankie Ballard’s “Young and Crazy” and Locash’s “ I Know Somebody” which is their first #1. Rhett’s also responsible for Blake Shelton’s “All About Tonight,” “Boys ‘Round Here” and “Honey Bee,” the latter of which spent a total of four weeks at No. 1. His Jason Aldean cuts include a three week No. 1 in “When She Says Baby,” “Just Gettin’ Started” and “Tonight Looks Good on You.” He had another three week No. 1 with Thomas Rhett’s “It Goes Like This.” He also wrote TR’s “Get Me Some of That." Rhett started 2017 off with a No. 1, for “Star Of The Show” which was co-written with his son, Thomas Rhett and their first No. 1 together.  In March of 2017, John Pardi’s “Dirt On My Boots” went No.1, which is #27 for Akins. In September 2017, Dustin Lynch's "Small Town Boy" spent 4 weeks at #1 on Billboard which became his 28th  number one.

This impressive list hasn't gone unnoticed in the music industry. Rhett has been the recipient of renowned awards and titles. In 2010, Rhett was named the No. 4 Billboard Country Songwriter. The following year, BMI named him Songwriter of the Year. He won it again in 2014. His song “Honey Bee” became the highest selling digital debut by a country male solo artist. His biggest accomplishment, though, may be winning the CMA Triple Play award a total of six times! The award is presented to a songwriter who penned three No. 1 singles in 12 months and he won it in October 2010, January 2012, February 2014, February 2015, February 2016 and again in February 2017!