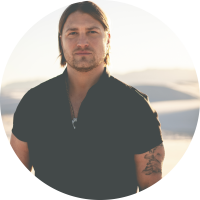 He was also the winner of the 2010 "Get Discovered" (iHeart Radio/Clear Channel) National Competition and was featured live on the iconic Jerry Lewis MDA telethon in Las Vegas and on the airwaves for over four million viewers. He was included in iTunes/Tunecore best of Country 2010 album featuring Brantley Gilbert and Colt Ford.

Billy penned the theme song “Born to Lead” for the CBS Sports Network Lombardi Awards and has his songs playing in stadiums nationwide for the NFL, NBA, MLB and NHL. He has also had his music placed on Netflix.

Every year Dawson is a celebrity golfer for the Pat and Emmitt Smith charities golf tournament, he is on the Red River Rivals OU celebrity softball team (team Toby Keith & Bob Stoops) and battles against University of Texas (team Matthew Mcconaughey & Roger Clemens) to raise money for Matthew’s, Toby’s and Roger charities.  Dawson is also a celebrity golfer at George Lopez Foundation tournament that helped raise money for kidneys for kids and is an ambassador for the Muscular Dystrophy Association.

In addition to his musical endeavors, Dawson is the author of (AMAZON best seller) "You Never Know", the first book in a series of children's books focusing bullying, racism and other societal issues involving children (which is now available www.amazon.com) He brings his book to life when he speaks at schools about the importance of respect and love in everyday life.

He recently is working on a new record produced by Rodney Clawson, Lee Brice and Jacob Rice.

Dawson was honored along side First Lady Laura Bush who was honored with the “Outstanding Citizens Award for Promotion of Literacy” by The Texas Authors Institute of History. He received the “Outstanding Social Impact Award” for his Amazon best-selling children’s book, “You Never Know”.