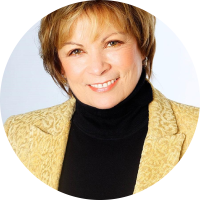 Event Description:  **You must be logged in on our website before trying to submit your song. This event will open for registration on Friday, September 2nd at 10am (CST). The registration form will not appear if you are not logged in on our website, as this event is solely for the Members of NSAI. You will only register with your name and email, please send MP3 and Lyric sheet in a word document to jill@nashvillesongwriters.com by end of day Friday September 2nd**

Sharon Vaughn’s versatility as a songwriter is exceptional. It’s hard to find another person who has written both classic country songs and international pop hits, songs and scripts for musicals and is known for her multiple successes in the Eurovision Song Contest (ESC).

Beginning her career in Nashville, enjoying success as a studio singer, an actor in commercials and as a solo artist, Sharon turned her focus to writing songs and scored numerous Number Ones and Top Tens in country music. First reaching the top of the charts were Y’ALL COME BACK SALOON by the Oak Ridge Boys, followed by the iconic MY HEROES HAVE ALWAYS BEEN COWBOYS, recorded first by Waylon Jennings and then became a #1 for Willie Nelson.  Her long list of the many artists who have recorded her country songs include Kenny Rogers, George Jones, Oak Ridge Boys, Tammy Wynette, Tanya Tucker, Randy Travis,(#1 OUT OF MY BONES) Patty Loveless (the chart-topping #1 LONELY TOO LONG), Don Williams, Trisha Yearwood (#1 POWERFUL THING) Reba McEntire, Mark Chesnutt, Jimmy Buffett, John Prine, Martina McBride, plus Keith Whitley and Lorrie Morgan whose duet ‘TIL A TEAR BECOMES A ROSE’ won the Vocal Country Event of the Year category at the Country Music Association award and was nominated for a Grammy.

Sharon Vaughn’s songwriting is boundless, both geographically and musically. She has co-written songs with Belgian songstress, Lara Fabian, among them the hit singles Papillion and Par Amour (nominated for Song of The Year by the Canadian Gala Adisq 2020), and for artists from all over the world such as Kate Ryan, Stefanie Heinzmann, Shane Filan, EXILE and Delta Goodrem (whose album Delta topped the charts in Australia and sold triple platinum)… Paul Brady, Clay Aiken, Per Gessle, September and others, In 2010 she co-wrote songs for the Irish band Boyzone’s platinum-selling album Brothers that topped the UK album charts.

Immediately after moving to Stockholm, in 2008, Sharon co-wrote with Anders Hansson, the single ‘RELEASE ME’, for Agnes which was a massive hit in the UK and charted all over Europe, as well as in Australia and in the U.S., where the song topped the Billboard Hot Dance Club Songs and won the Swedish Grammy. Sharon has also worked with the internationally recognized songwriter and producer Mutt Lange (Shania Twain, Celine Dion, Bryan Adams, AC/DC), and Matthew Gerrard (Nick Carter, Kelly Clarkson, Jonas Brothers), legendary writer/producer Desmond Child and Eurovision maestro, Dimitris Kontopoulos.

In 2021 Vaughn became the first songwriter ever to have three songs from three different countries in the Eurovision Song Contest, representing Estonia, Moldova and Greece. Prior to that, she penned the platinum-selling “SCREAM” for Russian artist Sergay Lazarev, who represented Russia in 2016 and 2019.

Currently working on several new Musical projects, her theatre works include, SWEET POTATO QUEENS, written with Grammy winning Melissa Manchester and Tony Award-winning Rupert Holmes; FIGHTING STAR, which ran in Finland, HATS, The Musical, and BREATHE, a new Musical by Jodi Piccoult and Tim McDonald, which was filmed and performed at the Ninety Second Street Y in New York in 2021. (This work has recently been installed in the U.S. Library of Congress).

She is presently on the boards of NSAI, The Nashville Songwriters Hall of Fame and is on the Mentoring staff of The Songwriters Academy, a London based operation. Additionally, she teaches her beloved craft of songwriting at various Universities around the globe

In 2019 Sharon Vaughn was inducted into the Nashville Songwriters Hall of Fame.